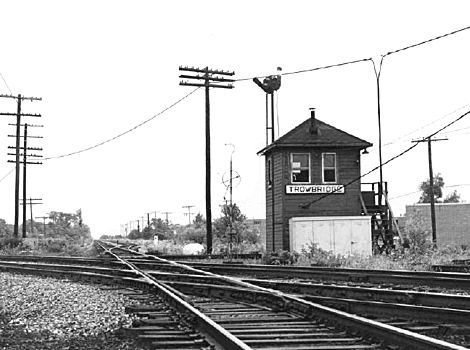 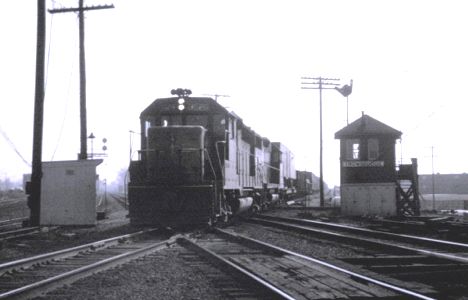 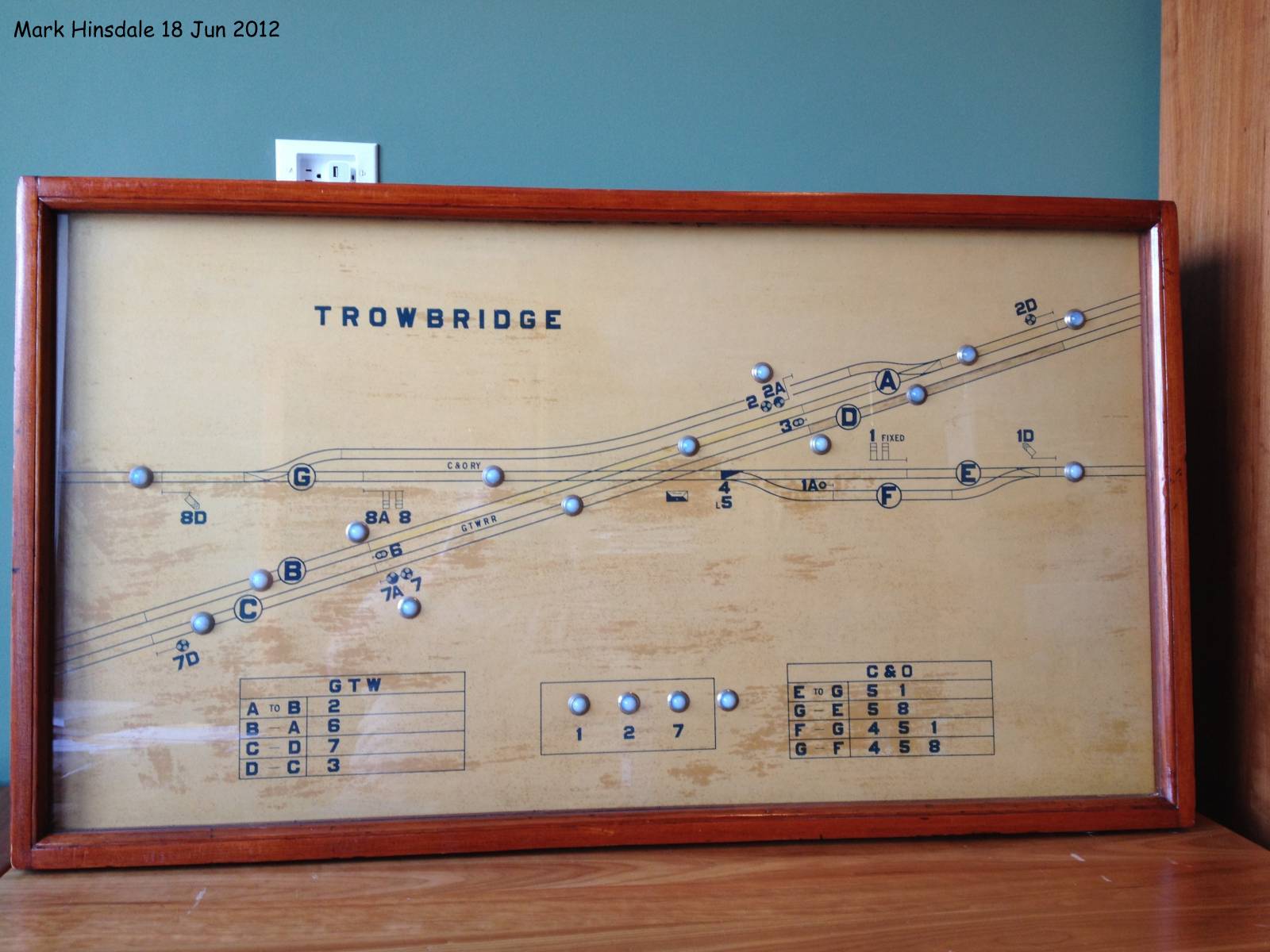 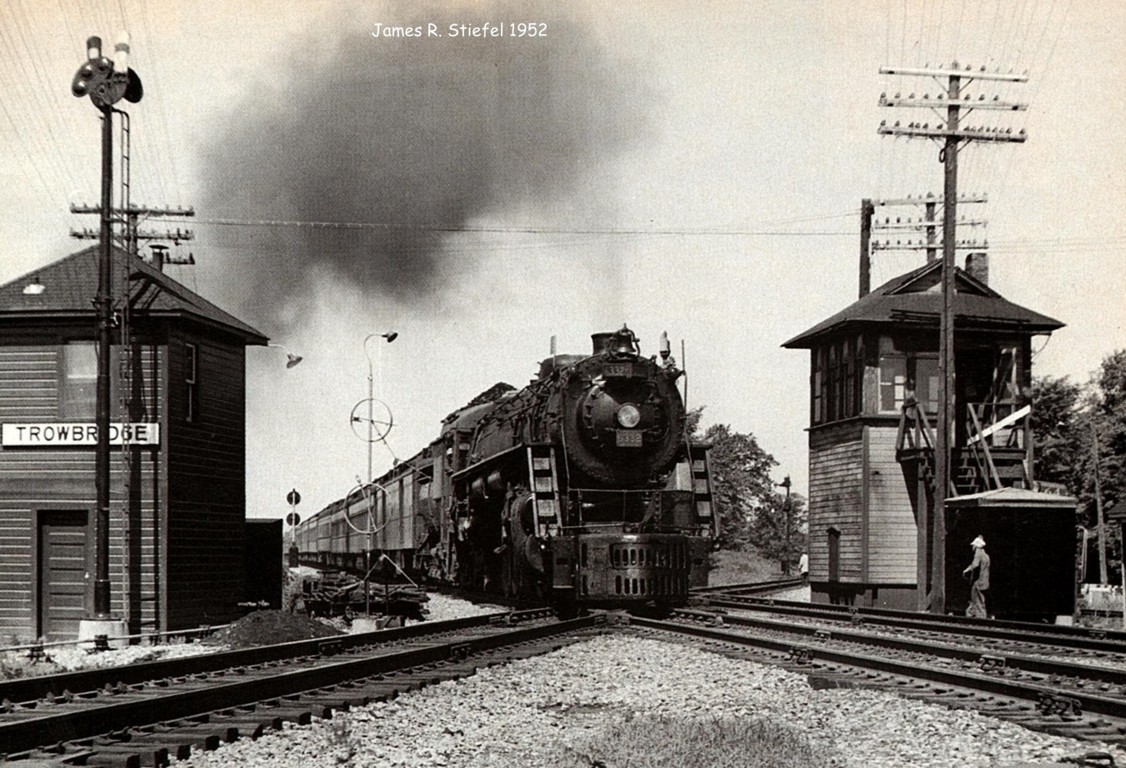 Until the mid-1920's, the two railroads operated a small union depot here which handled transferring passengers and less-than-carload freight.

Today the crossing continues to exist at milepost 223.5 on the CN mail line.

Photo info/credit: Top, Trowbridge Tower in East Lansing in 1966. This view looks east on the C&O. There is a Form 19 train order signal displayed for westbound C&O trains at the tower. [Charlie Whipp]. 2nd photo, C&O 3529 passes westbound over the GTW diamond. 1967. [Charles Geletske Jr.]; 3rd photo, the model board at Trowbridge [Mark Hindsdale]. 4th photo, from 1952 with two towers at the crossing. Not sure why. The locomotive is a GTW train. [Mark Stiefel Collection]

1918. The Grand Trunk had an agent here during the day, jointly with the PM. They also had a day operator, also joint with the PM. [TRT] The crossing operator on the 2nd and 3rd shifts may have been provided by the PM.

"Chicago Junction", Once Suburban Stop for City, May Slip Into Oblivion

Before the utilities commission the Grand Trunk and Pere Marquette systems will probably ask permission to abandon the station at Trowbridge, between this city and East Lansing, where the P.M. crosses the Grand Trunk Western tracks.

As a passenger station the junction years ago ceased it is said, to be of much service or of any consequence. A tower housing the signal systems has been maintained at the junction of the two roads since electrical equipment was adopted by railroads.

The junction has not always carried the name it now bears. At one time in its railroad history it was known on all time tables and railroad maps as "Chicago Junction". The station then did business in the passenger line.

Old timers still railroading on both systems say the junction was designated as Chicago Junction for the reason that this was one of the principal ways to reach Chicago. Passengers from Detroit got off the old D.L. and N. passenger trains along in the early eighties [1880's] and waited at Trowbridge for Grand Trunk trains to Chicago. The Grand Trunk was known then, it is said, as the Chicago and Lake Huron railroad.

The Detroit, Lansing and Northern, now the Pere Marquette from Detroit to Grand Rapids, ran from Detroit to Ionia at the time and had no connection at Grand Ledge with Grand Rapids. Many passengers from Chicago or points between that city and Lansing, Detroit bound, dropped off at Trowbridge and waited for D.L. and N. trains.

The station did a god business and was patronized by farmers and East Lansingites who lived in a settlement known as "M. A. C." Many persons bought tickets for Lansing over both lines to "trade". In fact, Chicago Junction was sort of a suburban stop for Lansing.

In event the Trowbridge station is abandoned as a ticket selling station, only the signal tower will function. And no freight cars will be transferred from one line to another unless fully loaded. No L.C.L. traffic, as now, will be handled. [LSJ-6/3/1926]