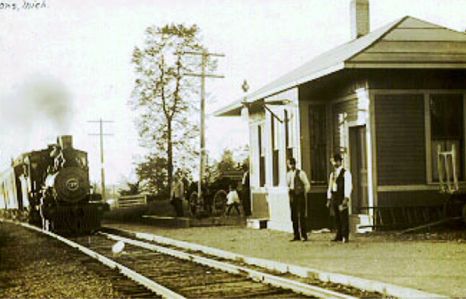 Lyons was settled about 1833 as Arthursburg in Ionia County. In 1836 it was platted and renamed Lyons. It was incorporated as a village in 1859. [MPN]

Lyons is adjacent to Muir, and is about five miles east of Ionia. Two railroads served the town, the Grand Trunk Western line from Durand to Grand Rapids and a short Pere Marquette branch line off their Grand Ledge to Howard City line.

1888 station facilities. The DL&N build a new freight, passenger house and platform at Lyons, to replace a building destroyed by fire. [DL&N-1888]