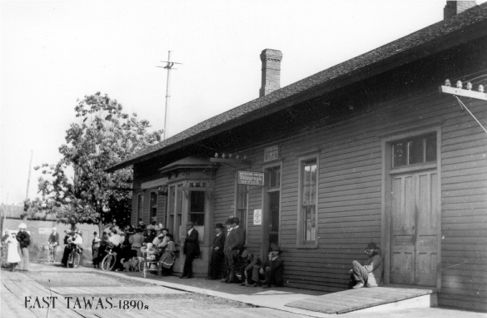 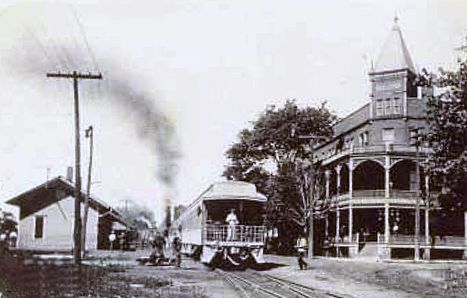 East Tawas was settled along Tawas Bay/Lake Huron as a lumber town in Iosco County about 1862. It became a station stop on the Detroit, Bay City & Alpena railroad (later D&M, Lake States) and incorporated as a village in 1887, It became a city in 1895. The city absorbed Tawas Beach in 1922. [MPN] The town is located adjacent to Tawas City which is a separate municipality.

The photo at the left is of the first depot at East Tawas. This was replaced by a much larger depot serving Tawas City and East Tawas, as well as the Michigan offices of the Detroit & Mackinac railroad.

Photo Info/Credit: Top, the original D&M depot at East Tawas, built about 1890. [Dale Berry collection]. 2nd photo, another shot of the depot with the Holland Hotel on the right. A D&M train is heading southbound in this photo. 3rd photo, Reported to be the D&M offices in East Tawas with the original depot at the right. Both are across from the Holland Hotel. [2nd and 3rd, Alan Loftis collection]

June 11, 1895. Darius Thompson went to Prescott to attend the funeral of his niece and was run over by the passenger train of the Detroit & Mackinac railroad. His body was cut in two. The longshoremen will bring his body to here (Detroit) as he was a member. [DFP-1895-0612].