Most railroad historians are aware that Michigan's first railroad track was laid from Toledo northwest to Adrian in 1836, even before Michigan achieved statehood. The Erie and Kalamazoo as it was called, was originally pulled by horsepower and then converted to steam propulsion.

The E&K began in Toledo with an odd 4' 10" gauge. The line changed ownership in 1848 and was converted to standard 4' 8 1/2" gauge to be compatile with other U.S. railroads. The E&K was then leased in 1849 to the Michigan Southern railroad, which had purchased Michigan's "Southern Line", a state owned line beginning at Monroe and going west to Adrian and beyond. The E&K connected with the southern line in Adrian. The E&K then became the Michigan Southern's entrance (or origin) from Toledo going as far west at the time to Hillsdale. It ultimately became part of the "Old Road" between Toledo and Chicago, via Adrian, Hillsdale, Coldwater, White Pigeon, Elkhart and South Bend. This was the first railroad from the east to reach Chicago. 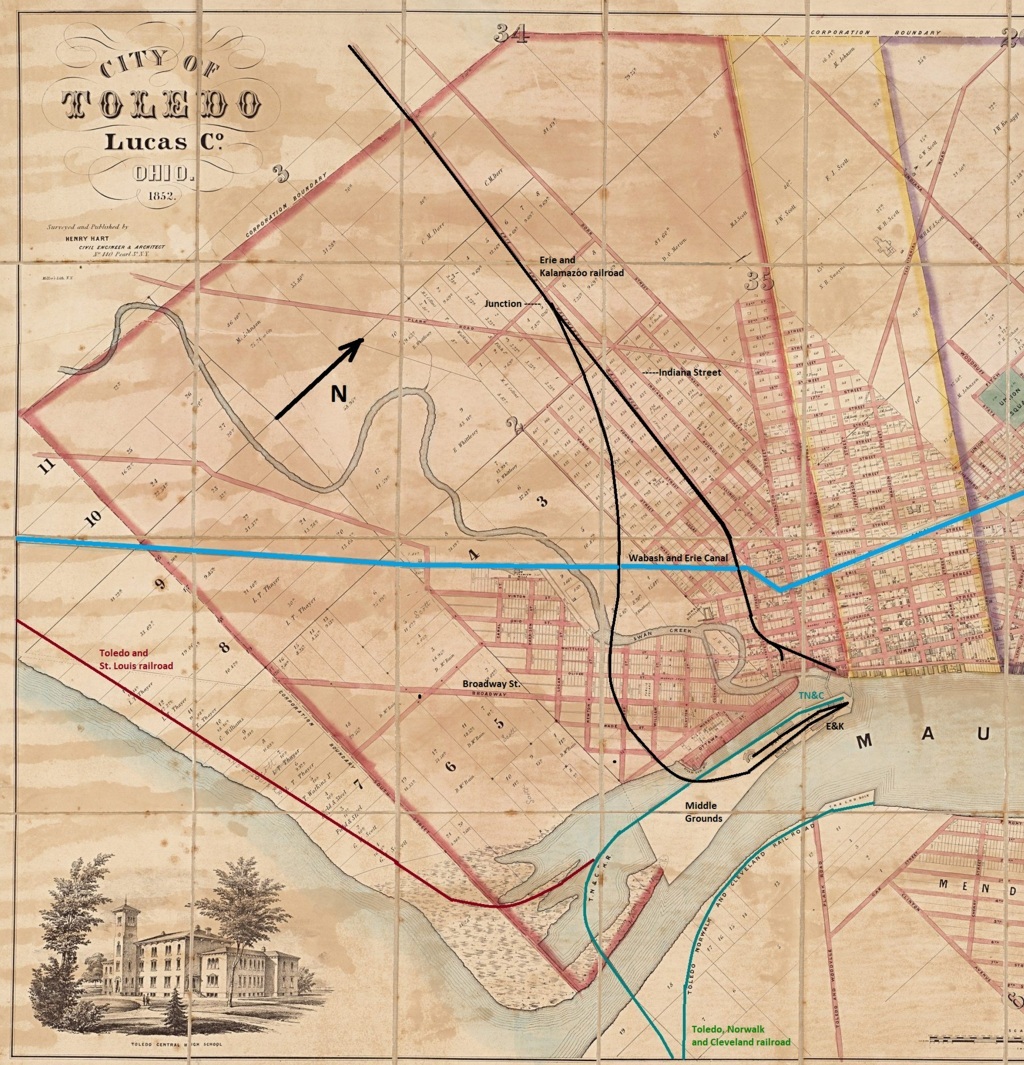 A 1852 map of Toledo (on the left) gives us our answer. This map was surveyed and published by Henry Hart, a civil engineer and architect, from New York City. By the 1852 survey, two other railroads - the Toledo, Norwalk and Cleveland, and the Toledo & St. Louis - had reached Toledo in addition to the E&K between Toledo and Adrian.

The TN&C was the forrunner of the Lake Shore & Michigan Southern, which ended up leasng the E&K and dozens of other lines as part of the Vanderbilt-owned railroad system. The Toledo & St. Louis became part of the Wabash system.

As what you would expect, the E&K actuallt began in what was then downtown hamlet of Toledo, along the Maumee River. From there it travelled due west near what is Indiana Street through farm land to the north side of what would later become the LS&MS Airline Yard.

This downtown location along the Maumee River was likely the origin point, allowing travellers from Lake Erie and products from the east be loaded onto railroad cars from boats.

At some point between the E&K's founding in1836 and 1852, the E&K also constructed a spur line to the "Middlegrounds" (noted on the map). The Middlegrounds was an island in the Maumee River which quickly became a focus of early railroads and shipping. By 1852, all three railroad interchanged at Middlegrounds. Even today, the "Middlegrounds" has rail service just north of Amtrak's union station.

Joining the three railroads at Toledo by 1852 was the Wabash & Erie Canal, which began in 1843 down river and crossed through the mddle of downtown Toledo headed to Fort Wayne, Indiana and beyond. At 460 miles, it was the longest man-made canal in U.S. history [Wiki]. (See map in light blue).

Within sixteen years, the E&K line to downtown was gone. An 1868 map published by H.H. Lloyd & Co. for Henry S. Stebbins, shows that the E&K, now under Michigan Southern control, had been relocated from what is now Union Station to Airline Yard, (The Wabash & Erie Canal had also been truncated to Swan Creek at this point and no longer bisected the downtown area.)

The Middlegrounds would go on to become the center of railroad activity in Toledo for many years with interchange between the Lake Shore & Michigan Southern, the Wabash, Clover Leaf and other railroads and lake shipping. Union station was also located nearby.

There is no evidence today of the E&K line from Airline Yard to downtown Toledo.