What tunnel? You have probably never heard of it.

But on December 3, 1891, it happened. The Lake Shore & Michigan Southern did indeed have a short tunnel under the Miami & Erie canal and the parallel Clover Leaf railroad in downtown Toledo. The tunnel was 75 feet long, and located 3/4 of a mile west of the current Amtrak station. Today, Anthony Wayne Trail crosses over the railroad at this point on a bridge.

The disaster was a rear-end collision around 4:45 p.m. A Lake Shore train, No. 6 known as the Boston and Chicago Special, travelling eastbound, passed a restricting target signal 300 feet before the tunnel. The engineer applied the brakes and slacked up because another train was ahead.

Following closely behind, a Flint & Pere Marquette passenger train headed for Toledo's Union depot (from Air Line Junction) came through the same tunnel and plunged into the rear coach of the Lake Shore train. 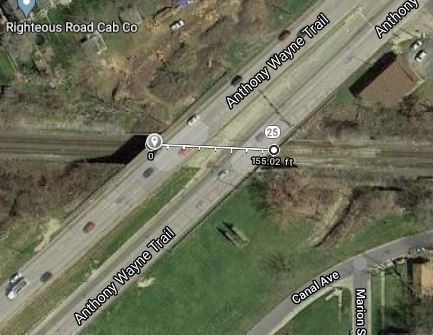 The Lake Shore train was vestibuled, but an "ordinary" day coach for the accommodation of way passengers, was attached to the rear, and it was destroyed.

The F&PM engine plowed its way through the car until the pilot was more than midway of the coach. The seats and floor were torn up and the unfortunate passengers bruised and maimed. Some were badly scalded by the escaping steam from broken pipes. The crash was described by those who heard it as terrific, and was followed by screams of agony from the wounded.

The times between these two trains were only two minutes apart. The Lake Shore train was running a bit behind. When the train stopped for the signal, the brakeman was sent back. He discovered that the tunnel was full of smoke and steam and heard the oncoming F&PM train, consisting of an engine and three cars. Fearful that he would be killed if he went into the tunnel, he held back and an instant later the F&PM train went by at a speed sufficient to prevent its stopping and struck the preceding train.

The tunnel was full of smoke, but the engineer of the F&PM train, which was already in the tunnel, saw the signal, and also the rear lights of the doomed car. He shut off steam and he and his fireman threw themselves flat on the floor of the cab, so as to be protected by the boiler. Both escaped unhurt, except for a severe shaking up. This engineer was a "new man" and this was his first run over the Lake Shore to Toledo union depot.

In the Lake Shore coach, 6 passengers died and dozens were injured. Most were treated at St. Vincent hospital, which continues to serve Toledo today.

[DFP-1891-1130} The Daily Times from New Philadelphia, Ohio was widely quoted in this story.

Additional background: The Miami & Erie canal was completed about 1845. It ran from Toledo to Cincinnati, creating a water route between Lake Erie and the Ohio River. It was in place at least 10 years before the existing Lake Shore right-of-way was routed underneath it. The "tunnel" was 75 feet long, which included the overhead crossing of the canal and Clover Leaf railroad line into downtown from the south.

It is interesting to consider that the canal was well above the level of the Lake Shore railroad and required the railroad to tunnel underneath it. According to historical maps of this area, the canal also was raised overtop of nearby Swan Creek, which it crossed just north of this location.