The Toledo Branch was a combination of two original routes. The west main line was the Lake Shore & Michigan Southern line and the east main line was the Michigan Central line. At points (such as Rouge Bridge) these lines are next to each other. But at other points they are farther apart. Around the turn of the 20th century, when both railroads came under Vanderbilt control, the lines were operated as bi-directional double main tracks and operated under a joint employee timetables.

Notes: The line line to C.S. Junction left the MC line at Wagon Works Junction, past Nebraska Avenue, over the Lake Shore Air Line (via a bridge) and south to C.S. Junction where it interchanged with the Wabash and Cloverleaf.

At Vienna Junction, a freight lead diverged south to the MC's New North Yard which connected on the south end with the Toledo Terminal near Hallet Tower.

The line from West Detroit to Delray was raised in a grade crossing improvement project in the 1920's. This eliminated the DSR crossing at Fort Street.

1925. The MC and NYC install new automatic block signals between Detroit and Toledo (River Rouge and Toledo on the NYC southbound section). This includes 150 color light signals, of the GRS type. The NYC line was noted as D.C. and the MC noted as A.C. 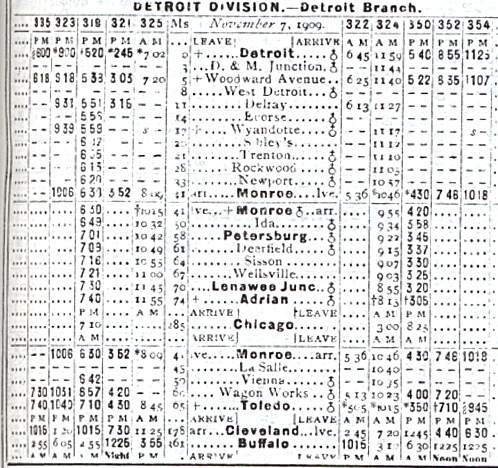