The Lansing Branch was originally built as the Northern Michigan railroad but was controlled by the Lake Shore & Michigan Southern from onset. The line extended from Jonesville in Hillsdale County to the state capital of Lansing via Albion. Station hours and siding capacity are as of 1926 and based on 43' cars.

The Lansing Branch served a number of industries near Albion, Eaton Rapids and Lansing, including the REO plant south of downtown.

Notes: Manual block signaling was used on th entire branch in 1926. Speed limits: Passenger trains 50 mph; Freight trains 30 mph. Restrictions to 10 mph in Albion and 6 mph in Eaton Rapids and Lansing. This line was dispatched by the Lake Shore dispatcher in Hillsdale in 1926.

In 1926, the Lansing branch had two passenger trains daily except Sunday in each direction between Jonesville (Hillsdale) and Lansing. #42 and #44 southbound and #41 and #43 northbound. These were morning and afternoon runs. One 2nd class freight train was also scheduled in each direction daily except Sunday. Meets of these trains on the single track commonly occured at Albion.

Albion: This location was the original Lake Shore station east of the MC crossing. Later, Lansing Division trains pulled into the MC Albion station on a side track at Tower A. The timetable noted that all Lansing branch trains had to be flagged over Superior Street, Albion between 6:00 pm and 11:00 pm.

I-94 Crossing: When the I-94 expressway was built in the 1960's, they did not build an overpass over the Lansing Branch because of very low train activity and the likelihood that the branch line would be abandoned and pulled up in a few years. This was one of about 1/5 dozen at-grade crossings on the interstate highway system which contained standard crossing warning lights. Another similar crossing on I-94 was the Ypsilanti branch, just west of US-23 near Ann Arbor.

Eaton Rapids: The crossing of the MC Grand Rapids branch was at grade and right-of-way controlled by a pole mounted target.

Lansing: The Lake Shore used their own decorative station at mp 58.8 before leaving it to use the Union Station north of Michigan Avenue. They built a curved junction track to reach this station. The MC station is now a restaurant named "Clara's".

Lansing: In 1926, Both Washington Avenue and Baker Street were protected by watchmen from 7:00 am to 5:00 pm daily except Sunday. During times that the crossing was not protected by a watchman, trains and engines must stop within 50 feet of the street before crossing it.

North Lansing: The Lake Shore had a connection here with the Pere Marquette's main line (east of Ensel Yard) and a connection to the MC's Saginaw Branch. The Lansing Transit Railway (owned by the NYC) crossed the Lansing branch here. 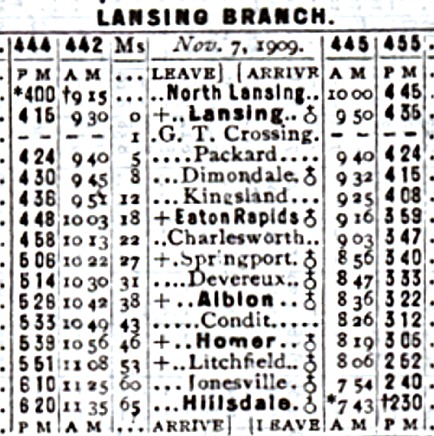 Left, from the Offical Guide to the Railways in 1909, a view of the North Lansing Branch. This indicates that the branch had two trains per day, each way.