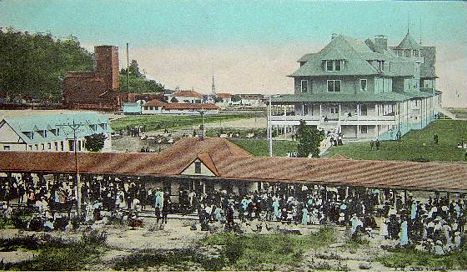 Photo Info/Credit: The Ann Arbor passenger station and Hotel Frontenac at Frankfort, Michigan in a postcard view. The hotel was built by the railroad in 1907 to promote tourism and use of their passenger trains. It was destroyed by fire on January 12, 1912.

In the late 1800's and early 1900's, railroads built their own resorts for the purpose of improving passenger train revenue.

At this time in our history, many citizens lived and worked in crowded cities in cramped conditions. The ability to run extra passenger trains to resorts which were outside of the city was very popular.

Some resorts, such as Linwood Park on the Detroit & Mackinac north of Bay City was within an hour of Bay City and Saginaw. Other resorts, such as the Grand Hotel on Mackinac Island, was a 12-hour train ride from Detroit or Grand Rapids, and required a ferry boat ride across the Straits of Mackinac.

Here are the known resorts which were owned or affiliated with railroads:

There were many resorts along railroad lines which were not officially owned or operated by the railroads. These included resorts at Lakeland, Manitou Beach and Harbor Springs.