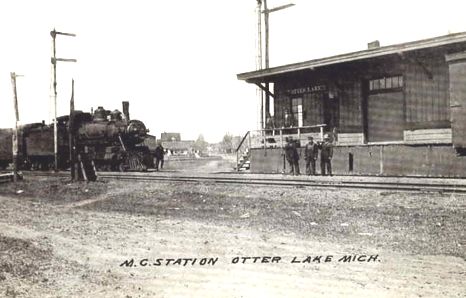 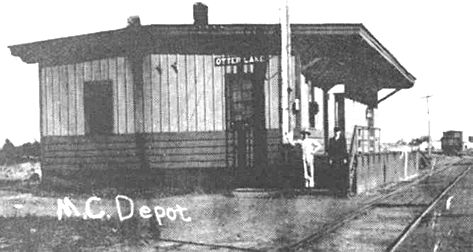 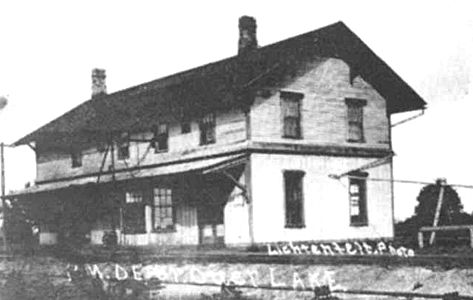 Otter Lake was settled around 1838 by the pine lumber firm of Page & Benson. It became a station stop around 1874 when the Pere Marquette came through. The town became a village in 1883. [MPN] Otter Lake was in the very northwest corner of Lapeer County.

Otter Lake was a crossing of the Pere Marquette branch line between Flint and Fostoria in Tuscola County, and the Michigan Central's Bay City branch from Detroit to Bay City via Saginaw. Both railroads had an interlocking tower here to protect the crossing.

The Pere Marquette branch line through here was later pulled up. Part of this branch became the right-of-way for the Huckleberry Railroad in Genesee County.

Charlie Whipp mentions that Otter Lake was used for ice production and the ice was shipped to other parts of Michigan for home refridgeration.  The largest ice houses in Otter Lake were located on the Pere Marquette and it was big business for them at that location.  Over the years, thousands of tones of ice were shipped out of Otter Lake, as well as there being a large sawmill complex in town.

"From the photo, it appears that the PM station was a 'housing & lights' agency, where the agent lived on the second floor of the building and took a slightly smaller salary because he had rent and heat figured into his salary", Whipp says.