Known as the " Big Four", the CCC&StL operated two lines in Michigan. One was the Michigan Division line from Goshen, Indiana north through Niles to Benton Harbor, a distance of about 32 miles and built in 1882. This line was built by Big Four predecessor Cincinnati, Wabash & Michigan. It served until 1942 when the southern portion of the line between Goshen and Niles was abandoned. The remainder of this line served until 1982 under Big Four, Penn Central and Conrail owners.

The second line into Michigan was from Jackson south to Franklin, Ohio via Bryan, Ohio. This line was built in 1888 by Big Four predecessor Cincinnati, Jackson & Mackinaw between Ohio and Addison Junction in Lenawee County. This is where the line combined with the combined with the east-west Michigan & Ohio railroad (Dundee west to Allegan). In 1896, the line was finally finished to Jackson from Addison Jct. This route continued to be operated by successor roads Cincinnati Northern, Big Four and New York Central companies until it was removed in 1976 near the beginning of Conrail. 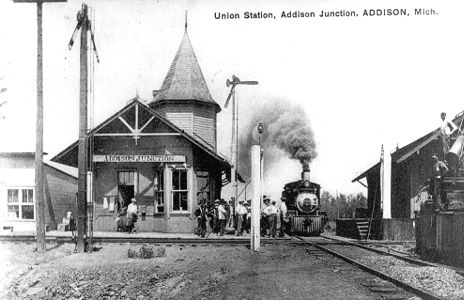 Photo Info: The Union Station at Addison Junction in Lenawee County, with an approaching train.