The Michigan Central railroad was organized by Boston financers in 1846 to purchase the "Central" line which was built and owned by the State of Michigan. Around 1878, the Vanderbilt family asserted control of the company through stock purchases, and the line (along with the Canada Southern) began a slow integration into the New York Central system, which was completed in 1930. In addition to the main line from Detroit to Chicago, the MC purchased branch lines all over Michigan.

Purchased from the State of Michigan: 1846

Control by: Vanderbilt lines - around 1878

The Michigan Central railroad was created primarily by Boston capitalists for the purpose of purchasing the "Central" line from the State of Michigan. See "Central" line. In the late 1830's, the state had invested in several public works projects consisting of new railroads and canals. The "central" project was one of these. Though more successful than the other public works projects, the state decided to exist these projects and this line, radiating west from Detroit was sold to the Michigan Central. 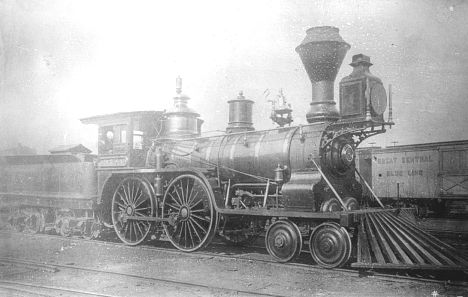 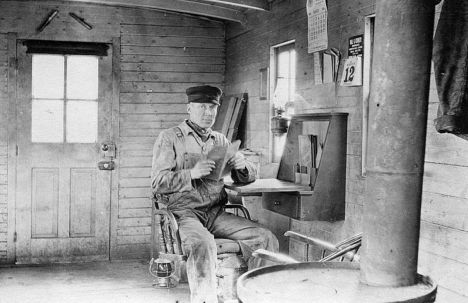 The Michigan Central was a profitable and successful railroad over the years, known for many innovations. It became controlled by Vanderbilt interests ( NYC&HR) and in 1916 was merged into the New York Central System. But it continued to be called the " Michigan Central" by many, and in fact the great Michigan Central passenger station in Detroit is still known by that name.

Photo Info: Top, this is MCRR No. 20, the "Stag Hound", taken in 1854. The locomotive was a product of the Lowell Locomotive Works. Note the large driver wheels which provided speed necessary for passenger train operations. The locomotive was also equipped with an oil headlight for night operations. This was a typical new locomotive purchase in the 1850's. [Doug Leffler collection]. 2nd photo, MC conductor Charles Milliken making a self portrait in his caboose in 1915. [Doug Leffler collection]

1846. Acquires the "Central" line from State of Michigan, from Detroit to Kalamazoo.

1852. Builds from Kalamazoo to Chicago.

1895. Controlled the Detroit, Delray & Dearborn (at incorporation). Consolidated in 1916.

1895. The MCRR has ordered from the General Electric Co. two search lights with which to illuminate Niagara Falls. The lamps will be of 100,000 candlepower each, and will have 48 inch reflectors. They will be placed near Falls View station. [RG]

1895. The Superintendent of the United State Mail Service has arranged for postal cars on fast trains between Buffalo and Detroit, through Canada, by the Michigan Central. [RG]

1902. January 11. The MCRR reorganizes, surrendering its special charter, and re-incorporating the company under the general railroad law. [MCR-1902]

1906. Control of the Chicago, Kalamazoo and Saginaw.

1920. The Michigan Central railroad serves 733 industries in Detroit with 719 sidings and a car capacity of 7,124 cars. They have 242 sets of team tracks which hold 1,214 cars and ten freight houses. [DWT-1920] This is the largest capacity to serve industry of all railroads in the Detroit market.

1926. The MC reports that steam-operated bell ringers have been installed on all locomotives. [RR]

1930. Leases their railroad to the New York Central railroad.

Reference: [MRRC] and other sources.