The Wisconsin Central railroad (new) was organized in 1987 and acquired property owned and operated by the Soo Line Railroad. In 1997, it also purchased operations of the C&NW lines in Michigan from the Union Pacific. In 1997, the WC was sold to the Union Pacific railway and the Michigan operations were spun off to the Canadian National railway. 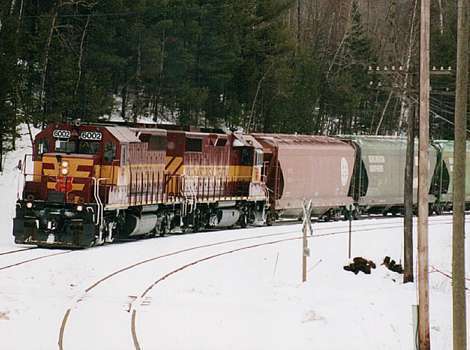 1987. The Wisconsin Central purchases the assets of the Soo Line railroad in the upper peninsula. [MRL]

1990. The WC purchases the remaining track of the LS&I between Munising Junction and Munising. [MRL]

1991. The WC line from Wisconsin to Ironwood and Bessemer (former Soo Line) was leased to a new corporation known as the Wisconsin & Michigan railroad. This was 6.8 miles in Michigan. The lease was terminated in 1995 when the new W&M went into receivership. [MRL]

1997. WC purchases C&NW lines in the upper peninsula. This includes Menominee to Escanaba, Powers to Antoine, and branches to Empire Mine, Cascade Jct. to Palmer and Ishpeming including the Tilden Mine, branch to the Tracy Mine and the Niagara Branch. [MRL]

1999. The WC abandons the old DSS&A line between Munising Junction to East Yard in Houghton, as well as the lead to the Marquette ore dock. They also abandon the former Soo Line main line between Hermansville and Larch.