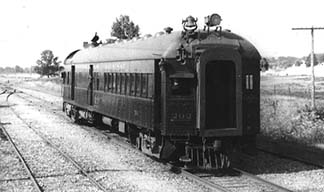 Greenbush, of Alcona county, was founded around 1848 as a fishing village on Lake Huron. Lumber operations were established here about 1862. It was called McDougal's Landing. The town was renamed Greenbush after a similar town in New York state. It was also called "Perfection" for a time. [MPN]

Greenbush was a station stop on the Detroit & Mackinac railroad (and processors), between Oscoda and Harrisville.

1901. A terrific blizzard is raging along the lake shore and in many instances drifts are eight or ten feet high. The D&M northbound passenger train is stalled at West Greenbush. [DFP-1901-0320]

The Lake State Railway established a transload terminal at Greenbush in 2020. The facility has three tracks and accommodates primarily lumber related products. [LSRC]