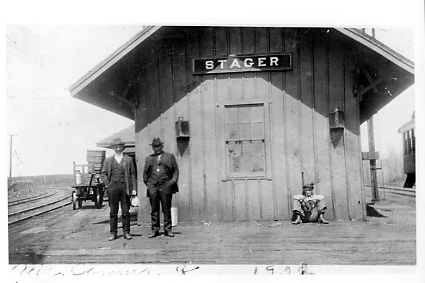 The C&NW built a station here in 1890. It was a simple rectangular frame building 20' by 60' with a gabled roof and wide overhanging eaves supported by wooden brackets. The depot was moved in 1971 to the Iron County Museum in Caspian. [UPM]

Photo Info/Credit: This is the C&NW depot at Stager in the early 1900's. Looking west, the line on the left heads west to Iron River, and the line to the right goes to Crystal Falls.

1918. The C&NW had telegraph operator here around the clock. [TRT]

1949. An elderly Stambaugh man, 88 years old, went for a walk and hopped on a freight train. Crews in the area were alerted by the Stambaugh yard master to watch for him. The man was found by an ore train crew between Pentoga and Stager. They stopped the train and invited the man to ride with them. At Stager, they stopped and called the Sheriff who responded and brought the man back home. [EDP-1948-0405]