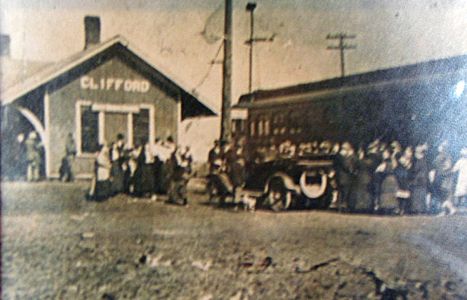 Clfford, in northeast Lapeer County, was settled about 1862 and became a village in 1891. [MPN]

Clifford is on the very north edge of Lapeer County and was a crossing of the north-south Pontiac, Oxford & Northern (later GTW) line to Caseville and the east-west Pere Marquette line from Saginaw to Port Huron via Marlette.

Photo Info/Credit: Top, an old photo of the depot at Clifford. This was the crossing of the Port Huron & Northwestern and the Grand Trunk Western. [Alan Loftis collection]