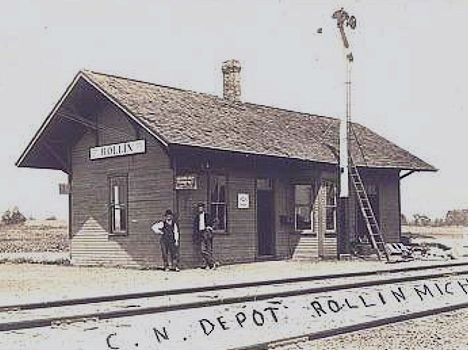 Rolllin was settled about 1833. [MPN] Later, the Cincinnati Northern railroad came through and established a station stop here, which was in western Lenawee County north of Hudson.

Rollin was a village on the Cincinnati Northern, between Hudson and Addison Junction.  The station was designated with telegraph call "IN" and a siding of 15 cars was created, later expended to 47 car lengths. Hawkins Lumber Company was the only business at Rollin, though there was a clay pit 1.5 miles south of town. Clay from this pit was transported for use at the cement plant near Cement City. Originally there was a stock pen, capable of handling a single double deck car, but it had been removed by the 1940's. [HCN]