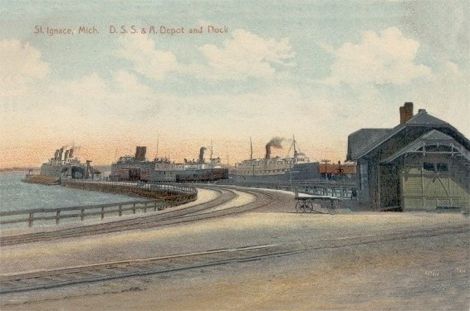 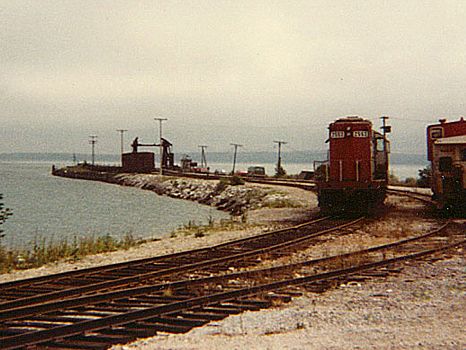 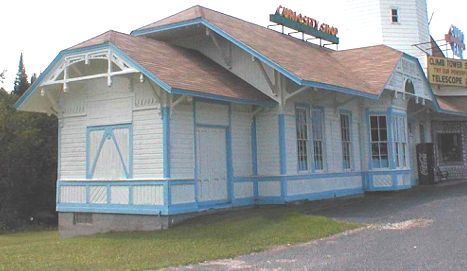 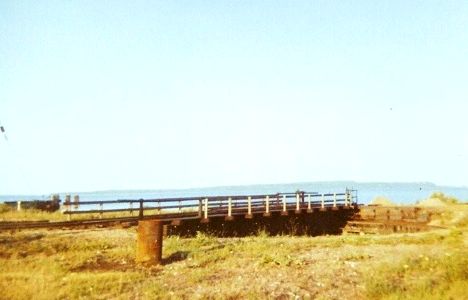 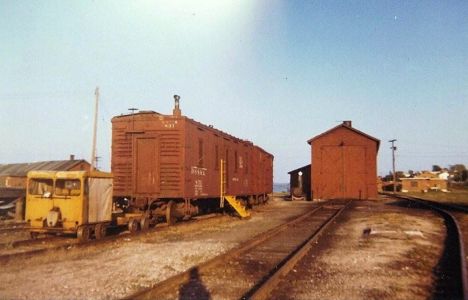 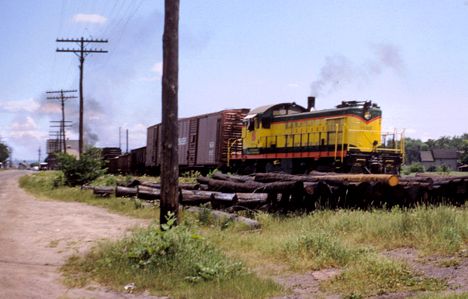 St. Ignace was founded around 1671 as a Catholic Jesuit mission. The town was also a trading post for furs and other commodities. It became a village in 1882 and a city in 1883.

Photo Info/Credit: Top, a postcard view of the DSS&A original depot and docks at St. Ignace. This depot was later moved to a location on US-2 west of town and was replaced with the South Shore depot from Moran, up the line. Note the railroad ferry at the end of the dock, along with other passenger ferries. 2nd photo, a 1980 view of the boat slip and lead with a Soo Line engine and caboose waiting for the next boat arrival. [Timothy Ryan]. 3rd photo, the original South Shore depot now converted to a store and located on US-2 west of town. [T.J. Gaffney]. 4th photo, a 1963 view of the turntable at St. Ignace. [Charles Geletzke Jr.]. 5th photo, a 1963 photo of the engine house at St. Ignace West Yard. [Charles Geletzke]. 6th photo, DSS&A o. 100, an RS-1, switches St. Ignace in the 1960s. [Neil Plagens]

From the Cheboygan Democrat, May 18, 1882:  We learn that considerable trouble is experienced by the D.M.&M. (Detroit, Mackinac & Marquette) people in getting their ore cars back from St. Ignace owing to their tendency to fly the track when empty.  The cars are new, and the springs being stiff as yet, they do not yield readily to accommodate themselves to the sinuosities of the track;  hence leave the rails on very slight profocation. With time and use this fault will disappear, of course, but in the mean time it is a great annoyance to the train men. Lately, the plan has been adopted of loading them with gravel at St. Ignace, which is brought back as "ballast" on the cars, and used afterwards to ballast the road.  This plan entails some labor, but as there is considerable gravel needed along the line the time required to load the cars with it at St. Ignace is not wholly lost.  From the Marquette Journal, reprinted in the Cheboygan Democrat. [CD/MIHX8]

The oldest DSS&A St. Ignace depot was moved from near the railroad car ferry dock area to the south side of US-2 approximately 2 miles west of the I-75 expressway and is now a business  It was moved around 1960. The DSS&A depot which is now along the waterfront was their depot from Moran. When the South Shore closed the Moran station in the mid-1950's they moved the depot to St. Ignace as it was a much bigger and better depot. It is now a restaurant [2004]. [CB]

West Yard Coaling Station. (1.0 miles west of the Railroad car ferry dock/slip). There was a turntable and roundhouse on the west side of the railroad yard just south and east of Marquette street. [CB/MIHX8]

Saw Mill Spur. (1.2 miles west of the Railroad car ferry dock/slip). A spur ran west, south of Reagan Street to the mill on the bay. The spur served the Mackinaw Lumber Company mill and successors such as the Jones & Kerry Mill. [CB/MIHX8]

Gravel Pit Switch. (1.5 miles west of the Railroad car ferry dock/slip). The gravel from this site was used to ballast the DSS&A track. The gravel pit spur went northwest beyond where I-75 expressway rauns on the west side of St. Ignace.  [CB/MIHX8]

The Martel Charcoal Iron Blast Furnace spur ran south approximately one mile to the blast furnace that was located approximately where the U.S. Coast Guard station and Arnold Transit Company Freight terminal are located [2004]. The blast furnace operated between about 1882 and 1893. The financial Panic of 1893 led to the closing of the furnace.[CB/MW/MIHX8]The old St. Ignace depot was 19' x 72' and was built in 1890 and existed until 1975. The replacement depot was 30' x 70' and was moved from Moran in July, 1947.  [Robert Oom].

The DSS&A station was built in 1890 replacing an older model. It is a rectangular, wood-framed building with a hipped roof with wide overhanging eaves supported by wooden brackets. The station is 20' by 150' long divided equally into a passenger section and freighthouse. [UPM]