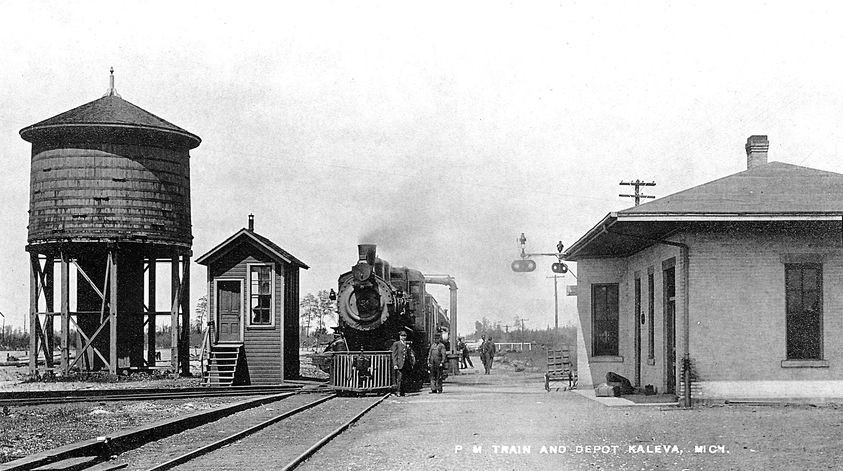 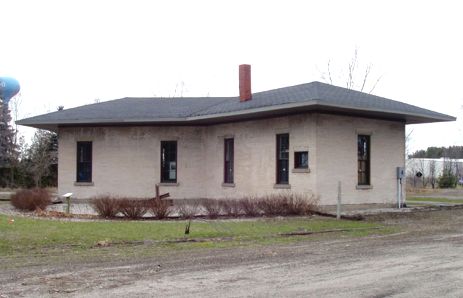 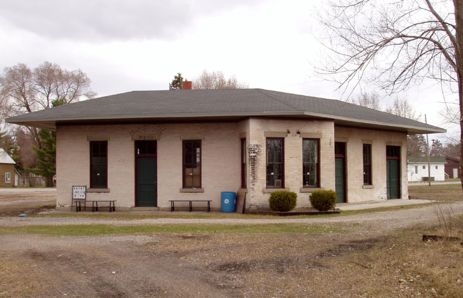 Kaleva, in northeast Manistee County, was settled about 1894 as Manistee Crossing. It was renamed Kaleva in 1900. The town became a village in 1948. [MPN]

Kaleva was the crossing of the Pere Marquette north-south line from Grand Rapids to Traverse City and the Manistee & North Eastern main line from Manistee to Copemish. Both railroads used the depot, making it a small "union" depot by railroad terms.

When the M&NE came under PM ownership, the M&NE line was abandoned between Kaleva and Interlochen in favor of the PM route.

Photo Info/Credit: Top, The depot and crossing in the 1920's; 2nd photo, an old photo of the union depot in Kaleva. 3rd and 4th photos, a 2004 view of the restored depot from two sides. The top is a street view and the bottom faces the former railroad diamond crossing. [Alan Loftis]

In the Matter of the Complaint against the Pere Marquette Railroad Company and the Manistee & Northeastern Railroad Company for Failure to Install a Telephone in the Union Depot at Kaleva, Michigan. T-347. April 18, 1921.

Application having been made to this Commission for an order directing the maintenance of telephone service in the Union railroad station at Kaleva, Michigan, in accordance with the Provisions of Act No. 3S3 of the Public Acts of 1915, and this Commission having caused said complaint to be investigated by John J. Norman, Chief Telephone Inspector, who has reported the result of his investigation to this Commission, from which it appears that said depot is a union station at the junction of the Manistee & Northeastern Railroad Company and the Pere Marquette Railroad Company; that the same is maintained by the Pere Marquette Railroad and that the expense of maintenance is divided between said railroad companies, the Pere Marquette Railroad billing the Manistee & Northeastern Railroad Company for its proportionate part of the cost and expense of maintenance; that by reason of the business transacted in the Village of Kaleva, stock shipments from the adjacent farming country and its handling a large part of the passenger traffic to Lake Onekama, the installation and maintenance of said telephone would be in the interest of public convenience and necessity;

Now, THEREFORE, IT IS HEREBY ORDERED, By the Michigan Public Utilities Commission that, effective May 15, 1921, said Pere Marquette Railroad Company and said Manistee & Northeastern Railroad Company be and they are hereby directed to maintain a telephone in the Union station at Kaleva, Michigan, the same to be maintained until September 15, 1921, or until the further order of the Commission; said telephone to be connected with the lines of the Benzie Consolidated Telephone Company and the Jungle Telephone Lines.