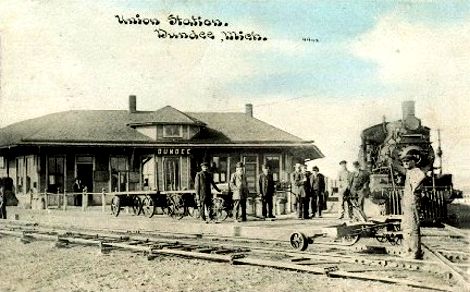 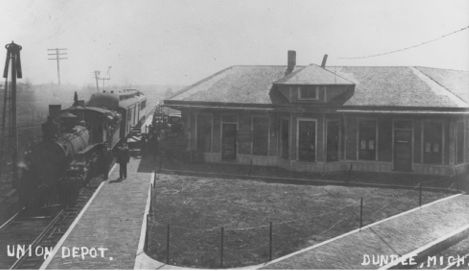 Dundee was settled about 1823 in northwest Monroe County. It was originally known as Van Ness's Mills and then Winfield. Dundee became a village in 1855.

Dundee's sole remaining railroad line is the Ann Arbor railroad which came through here enroute to Ann Arbor and Frankfort, Michigan in the 1870's. However several other railroad lines came through in an east-west direction, some using the same right-of-ways. First was the Canada Southern line which crossed the Detroit River at Grosse Isle and headed southwest towards Chicago via Flat Rock, Carleton, Maybee, through Dundee, Deerfield, Morenci and running out of money at Fayette, Ohio. After this line declared bankruptcy and pulled up its rail, the Detroit & Lima Northern used some of this right of way east of nearby Durban. The Detroit & Lima Northern (predecessor to the DT&I) originally leased the DT&M line from Tecumseh to Dundee, built a connection between Dundee and Durban, and then east on to Delray in Detroit. The D&LNI also look over an ill-fated interurban railroad grade from Toledo to Petersburg, built a connection to Dundee, giving them a branch line to the Toledo terminal.

When Ford purchased the DT&I in the 1920's, he built a more direct route southwest from Durban to Malinta, closing down the DT&I route through Dundee. This left the Ann Arbor as the only railroad in the village.

Photo Info/Credit: Top, a postcard view of the union station in Dundee. The pipes running next to the rails connect to the signals at the interlocker. 2nd photo, another view with a passenger train . 3rd photo, a replacement depot, taken in 1979. By this time, the building housed an agent/operator as passenger traffic had disappeared. [Charles Geletzke Jr.]

May, 1898. Taken Up On Sunday. Dundee Branch of the Lake Shore Railroad. Dundee, Mich. May 15 - (Special) - All traces of what was known as the Dundee branch of the Lake Shore railroad have now faded away since the road became the property of the Lima Northern. The portion between Dundee and one mile east of Raisinville has not been used much, only one train a day being run over the line, just enough to hold it. To-day the track was taken up by the Lima Northern people to the point east of Raisinville where the new line connects with the old line. This does away with the theory that the Pennsylvania road will run their trains from Toledo into Detroit over the Lima Northern, also that the Lima Northern will run into Toledo, as the portion taken up would have been the line used. [DFP-1898-0516]

March 21, 1930: The Michigan Public Utilities Commission grants to the DT&I the authority to discontinue the leverman at their interlocking with the Ann Arbor Railroad, on account of no scheduled trains any longer between Durban Junction and Dundee. The DT&I advised that in the future, they will rarely use the interlocking and in such cases they will have the DT&I operator at Dundee operate the interlocker. Signals to be normally set for the Ann Arbor railroad. The AA agrees with the petition. [MPUC-1930]

April 16, 1930: The MPUC grants discontinuance of the DT&I between Durban Junction and Dundee. The Commission notes that the town is still served by the AA and the NYC (DT&M] from the west. [MPUC-1930]

1872 - The original east-west main line, built by the Canada Southern (CS) from Amherstburg, Ontario to Fayette, Ohio (via Stony Island, Grosse Isle, Dundee, Grosvenor, and Morenci) came into Dundee just south of the village and south of the Raisin River. This was the first railroad to reach Dundee. This line was part of a plan by the initial investors of the CS to build a line from Canada to Chicago. The CS line became the Chicago & Canada Southern and then leased to the Lake Shore & Michigan Southern railroad in 1879. The line was pulled up around 1897 around the time when the line was purchased from the Lake Shore by the Detroit & Lima Northern.

1881 - The Toledo, Ann Arbor & Grand Trunk, one of the predecessors to the Ann Arbor Railroad, builds north from Toledo and reaches Dundee headed for Ann Arbor. (They cross the CS about 1/2 mile south of the Raisin River (near present day M-52).

1883 - The Michigan & Ohio railroad builds into Dundee from Tecumseh and creates a wye connection with the TAA&GT. This later becomes the Detroit, Toledo & Milwaukee and uses trackage rights on the TAA&GT to Toledo.

1897 - The original CS line from North Raisinville west towards Deerfield is removed, eliminating the crossing of the original AA railroad just south of Dundee (near what is today M-52). This location at North Raisinville is later known as Durban. In addition to the original CS line, two other lines ultimately branched from here, one east to the DT&M in Dundee in 1898 and the Malinta cut-off in the southwesterly direction.

1897 - The Detroit & Lima Northern (D&LN), which had reached Dundee via trackage rights on the DT&M, purchases the Lake Shore's former CS line between Dundee and Flat Rock (Slocum Jct.), with a goal of finally reaching the Detroit area.

1898 - The D&LN, which reaches Tecumseh from the south and uses the DT&M to reach Dundee, builds a connection between Dundee Junction to a connection with the LSMS/DT&I near North Raisinville.

1915 - The Detroit, Toledo & Ironton builds a new branch connection from Dundee southwest to Petersburg and a connection with the Detroit & Toledo railroad at Petersburg Junction. The line crosses the Lake Shore Monroe Branch in Petersburg. This gives the DT&I an important route to reach Toledo.

1929 - Now under Henry Ford ownership, the Detroit, Toledo & Ironton builds the Malinta cut-off from Durban (near North Raisinville) in a tangent to Malinta, Ohio, passing south of Dundee. It crosses the AARR at a new interlocking at Diann, and crosses the DT&I Toledo branch at a new place known as Petersburg Junction, (2 miles south of Petersburg). This cutoff replaces the DT&I's meandering line through Tecumseh and Adrian with a high speed, direct route.

1930 - The connection built in 1915 from Dundee to Petersburg is removed, now that the DT&I can access their Toledo branch at Petersburg Junction.

1930 - The connection from Durban (North Raisinville) to the DT&M line at Dundee is removed, with the DT&I now using the Malinta cutoff.

1932 - The former DT&M (operated by the DT&I) between Tecumseh and Dundee is abandoned. The DT&I now accesses Tecumseh from the south via Adrian.

1963 - The DT&I's Toledo branch from Petersburg Jct. to Toledo is removed. Traffic for Toledo now moves over the Ann Arbor railroad via trackage rights from Diann to the Toledo Terminal railroad.

1976 - The NYC Monroe Branch (formally the Lake Shore & Michigan Southern is removed between Lenawee Junction the Ida. It had been removed each of Ida in 1953.

Today, Dundee is served by the Ann Arbor Railroad, and the Indiana & Ohio (former DT&I) which continues to operate near Diann south of town.

The information for this article was received from Don Meints' two-volume Michigan Railroad Lines, as well as from several old maps, the USGS and Google Maps' mapping program.