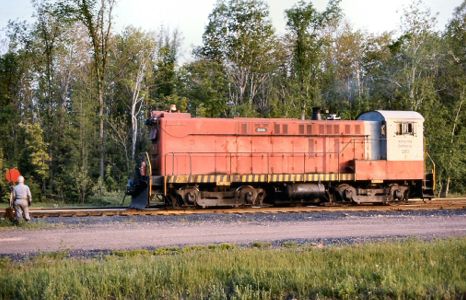 White Pine was reached by two different railroads. The old Ontonagon Railroad reached town from the north. This became a branch of the MILW. Later, the Duluth, South Shore and Atlantic railroad built a branch line to here from their main line at Bergland.

Photo Info: Top, the railroad yard at White Pine. This is the former branch of the DSS&A which is now owned by Canadian National. It served the copper mine at White Pine. 2003. [Dale Berry]. 2nd photo, White Pine Copper Mine #200 switches the plant in June, 1976. This unit is the former Copper Range 200, a Baldwin S-12. [Rob Kitchen]