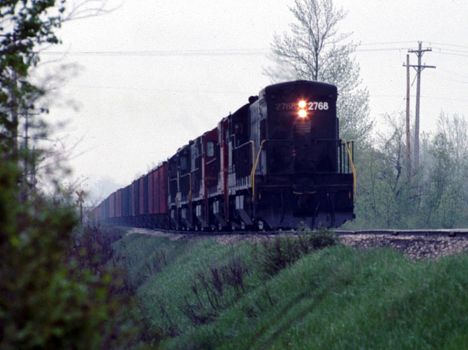 Lennon was settled in 1880 in Shiawassee County and a grain elevator was established here on the Grand Trunk Western railroad. [MPN] The town is located about six miles northeast of Durand, on the GTW's branch to Bay City.

Photo Info/Credit: In an unusual move, Penn Central 2768 (a GE U25B) leads an empty coal train on the GTW "Salt Line" southbound near Lennon in 1976. Many unusual moves were made during this period as normal Penn Central routes were badly deteriorated and couldn't handle the weight of coal trains headed to Essexville near Bay City. [Charlie Whipp]