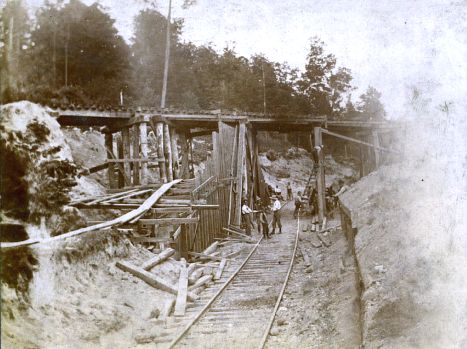 Claggett was settled about 1897 with a large sawmill being located here. The town was also known as Claggettville. [MPN] Clagett was the crossing of the Ann Arbor railroad and the M&NE Grayling branch. It was located two miles west of Mesick in Wexford County.

Photo info/credit: Top, this photograph is believed to be the over/underpass at Claggett, just west of Mesick.  Though not confirmed, the collector notes that the M&NE also had an underpass at Walton but the track beneath would have been straight at that point and this track is curved.  The line on top is the Ann Arbor Railroad and the line below is the M&NE looking northeast.  The photo dates from 1904 or 1905.  The crew appears to be in the process of changing this from a trestle to a bridge, preparing to pour concrete sides in preparation for fill. [Charles Showalter Collection]