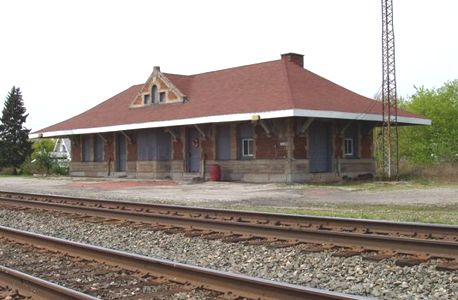 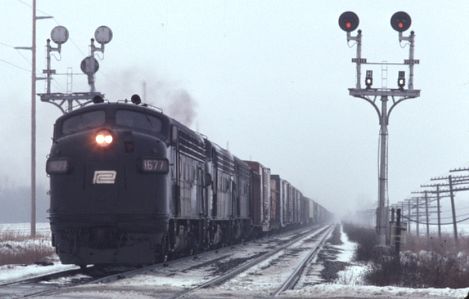 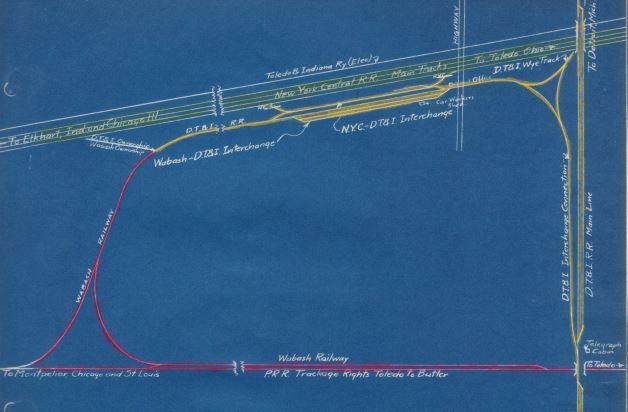 Delta, Ohio is located on the New York Central's east-west main line between Toledo and Elkhart, Indiana.Two other railroads passed through Delta. The Wabash line from Toledo to Chicago was parallel to and south of the NYC. The north-south DT&I passed over the NYC and Wabash on an elevated main line. The DT&I had an interchange yard here which connected with both lines.

Photo info/credit: Top, the former New York Central depot at Delta, Ohio. 2004. [Alan Loftis]  2nd photo, Penn Central 1677 leads a westbound train through Delta, Ohio in 1975. [Mark Hinsdale]. 3rd photo, a 1930s map of Delta with the NYC in green, DT&I in yellow and Wabash in red. The Toledo & Indiana Railway (electric) passed along the north side of the NYC. [DT&I blueprint]

1930.  The DT&I had a three-track interchange yard here, south of the NYC tracks. They also had a wye track for turning locomotives on the east side of their yard. The west side yard had a connection with the Wabash railway, who also had their own wye track.

1930s. At Delta the DT&I crosses overhead the branch of the Wabash which runs from Toledo to Montpelier and the main line of the New York Central between Toledo and Chicago. The latter crossing is an apex with 0.3% approach grades both north and south.

Between the two railroad separations, a track leads off the DT&I main toward the west, dropping on a 0.5% grade, to interchange tracks, where connections are made both to the Wabash and New York Central. This is the principal interchange point with the Wabash for cars mvoing to or from the west. The two Wabash inerchange tracks have a capacity of 203 cars (later 120 cars), while the New York Central track holds 102 cars (later 50 cars).

On the east side of the DT&I main track are two passing tracks of 100-cars capacity each. Near the interchange yard, there is a wye used for turninglocomotives of the "Delta turns" from Detroit. The vollage of Delta is located about two miles to the east and the DT&I has no industrial or ream tracks.

The DT&I blueprint indicates that the Wabash had a passing track here and that the Pensylvania Railroad had trackage rights between Toledo and Butler, IN.

2021. The major changes at Delta are 1) the Wabash railway is gone, and 2) The former DT&I (now O&I) has "ramped" interchanges both on the north and south side of what is today Norfolk Southern. Two large industries on the north side of the NS main line are North Star Bluescope Steel (east of route 10) and Worthington Steel (west of route 10). Both steel plants interchange with NS and the Ohio & Indiana railroads. Both plants also operate their own industrial railroads with switcher locomotives.