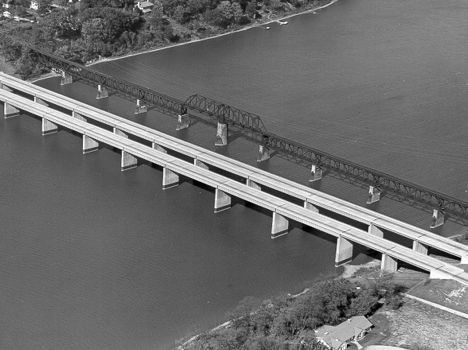 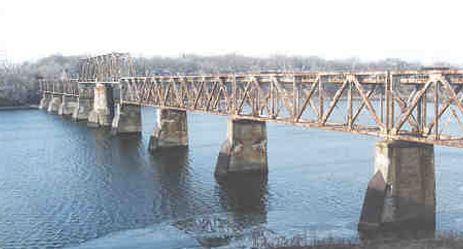 This long bridge was used by the Toledo Terminal on its circle belt line route in and around Toledo.  This is the upper Maumee River crossing.  The long bridge contained a series of fixed spans and a swing bridge near the middle.  The bridge was built in 1902 and probably used first in 1903.  The tracks were removed in the 1960's.  Each fixed span was made up of six truss panels measuring 25 feet each for a fixed span length of 1,200 feet.  The swing span is 250 feet long.  The last train to use the bridge was probably around 1980.

Gary L. Franks is a civil engineer who has an interest in Maumee River Bridges.  "The swing span on this bridge, if used at all, may have opened only a few times in its earliest days.  When this area was settled (circa 1816-1836) the towns of Maumee and Perrysburg (about 3-4 miles above this bridge) were the centers of commercial riverboat traffic in the area.  However, a rock bar in the river about two miles below this bride only allowed boats with a six foot draft or less to pass upriver.  As higher draft boars came into being, the Port of Toledo (downriver about 10 miles) became the center of commercial navigation.

"The Toledo Terminal Railroad was formed in 1903 when commercial navigation upriver to Maumee and Perrysburg was declining; however there must have been some traffic of low-draft boats as this bridge was built to open with a center swing span.  The clearance of the center swing span above normal water level is about 30-35 feet.  I was able to sail my Hobie Cat 16 with a mast height of 28 feet above water under it with no problem about 15 years ago.  The bridge immediately above this bridge is the Ohio Turnpike bridge.

"There were other bridges across the river near this location for interurban light railroads until 1927.  The Toledo, Bowling Green & Southern interurban railwa bridge nearby was constructed about 1905 and demolished about 1930."

First bottom photo - A steam powered freight train traverses the bridge during the winter of 1904, about a year after the bridge was built.  [Gary Franks collection]

The Toledo Terminal crossed the Maumee River in two locations on its belt line around the city.  This is the Upper Maumee River bridge, which was single track.  (The Lower bridge was double track).  The Upper bridge was designed to be a swing bridge but information suggests that it was never equipped with motors and never opened.  The bridge had loading restrictions and was permanently abandoned after an accident in May, 1982. 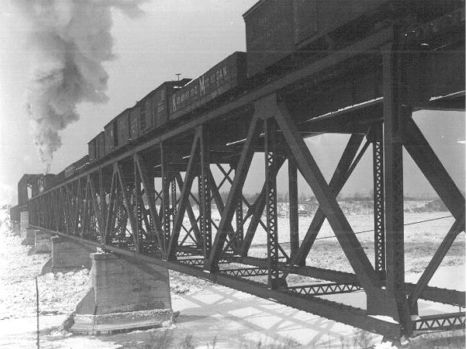 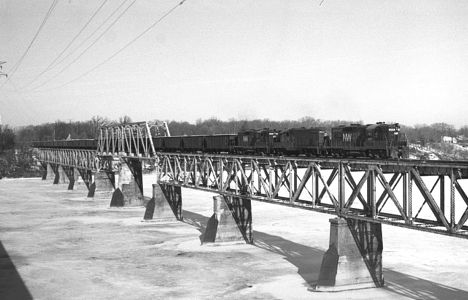