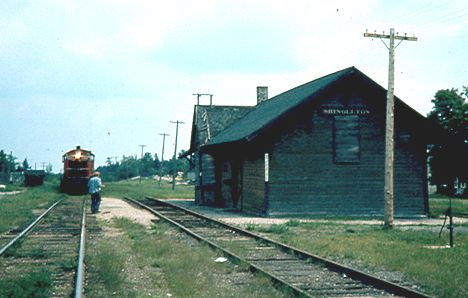 Shingleton was a station on the Detroit, Mackinaw & Marquette Railroad in Alger County.  It was formed in 1882 and originally named Jeromeville. [MPN]

In its early days, a shingle mill was located here with close proximity to the forests.  It later became a junction point for the Manistique & Lake Superior Railroad which ran north into the forests from its port at Manistique.

Photo Info/Credit:  The photo here of the DSS&A station at Shingleton was taken in 1972. Th train on the main line is a weed spraying train. [Greg Bunce]

1918. The DSS&A had an agent/operator here during the day. This was a joint agency with the M&LS. [TRT]