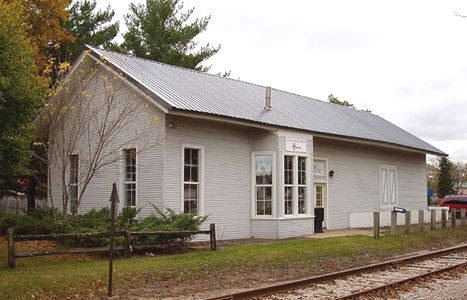 Mancelona in Antrim County was settled in 1969. It was incorporated as a village in 1867. [MPN] It became a station stop on the Grand Rapids & Indiana railroad on their line from Grand Rapids to Mackinaw City.

From the Grand Rapids Eagle, May 30, 1980: Yesterday afternoon, a train of fifty-one loaded ore cars were coming down a grade just north of here when a draw bar on the fourth car from the engine pulled out and dropped on the track. Thirty-nine cars were piled up on the [GR&I] main track in a space of a hundred feet. Men worked all night laying track around the wreck but were driven off by a very heavy rain storm. Passenger trains were delayed about twelve hours. It will take two or three days to remove the wreck. No one was hurt. [MIHX8]