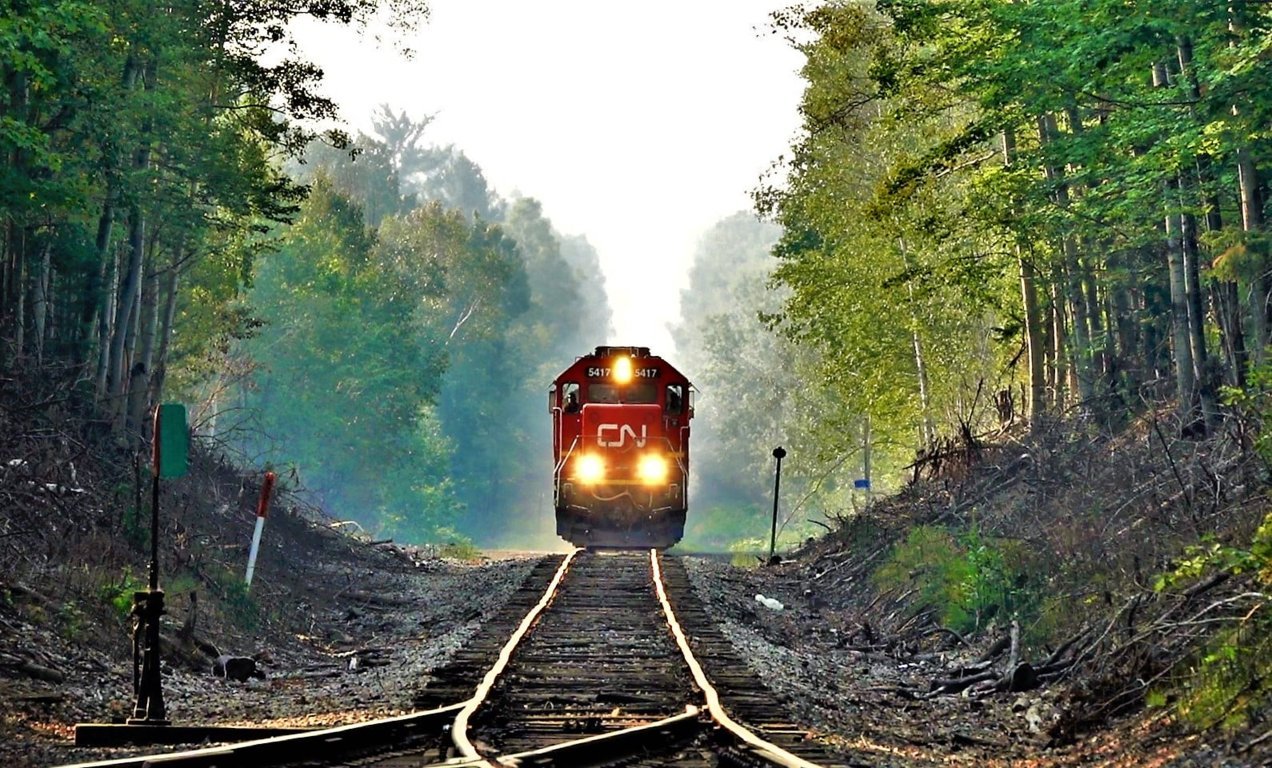 L'Anse Hill is located between L'Anse (on the north) and Herman (on the south). The Canadian National line (former DSS&A and Soo Line) has a long descending grade for northbound trains which requires special speed and braking. Over the years, there have been several accidents by northbound trains which ran out of control down the grade, usually turning over and derailing on the curve near the village of L'Anse.

Photo Info: Top, a CN train carefully comes down L'Anse Hill, in 2021. This train will switch Celotex in L'Anse and back to Ishpeming. [Nancy Haun photo]. 2nd photo, a DSS&A wreck at L'Anse in 1950. It was 20 degrees below zero at the time.

The following general order was implemented about operations on L'Anse Hill by the Wisconsin Central Railroad in 1992.

All Concerned - All Subdivisions

The following conditions will govern:

Train Handling for the L’Anse Subdivision:

Freight trains stopping on the ascending grade between L’Anse and Summit or Marquette and Morgan will be governed by the following Instructions.

1. The engineer will immediately make a full service brake pipe reduction to hold the train on the grade.

2. A member of the crew will immediately apply all hand brakes to secure train on the grade and set retainer valves before releasing and recharging the air brakes.

3. After the sir brake system is fully recharged and with hand brakes still applied on loaded cars and retainer valves set, the engineer will attempt to back the train down the grade to a level location if operating rules permit. Additional hand brakes must be released if the train is unable to back down the grade.

4. Trains stopped on the grade between L’Anse and Summit will back down the grade to either Herman (MP 9) or Bovine (MP14.8) if  conditions permit.

5. Trains unable to back down the grade to a level location will make an emergency brake application and apply hand brakes on all cars left unattended before doubling train to the top of the grade.

Freight trains descending the grade between Summit and L’Anse or Morgan and Marquette will be governed by the following instructions.

1. Air brake system on engine and train must be fully charged.

2. Lead locomotive must be equipped with a brake pipe pressure maintaining feature in operative condition.

3. Train must be stopped if speed cannot be controlled from an 18 PSI brake pipe reduction.

4. An emergency brake application should be made without hesitation if train speed cannot be controlled safely.

5. Should the train be stopped by emergency action all hand brakes must be applied to hold the train before recharging the train brakes to the required pressure.

6. Trains required to double down the grade will apply hand brakes on all cars left on the grade. An emergency application of the brakes must be made on the cars to be left before the hand brakes are applied. When necessary, hand brakes will remain Applied on the loaded cars being doubled down the grade. Care
must be taken to insure the wheels do not slide.

The following instructions are in effect between November 15 and March 15 or when snow is above the rail.

1. Westward trains descending between Summit and L’Anse will have the retainer valves set to the high pressure position on loaded cars and low pressure or slow direct exhaust position on empty cars when tons per operative brake exceeds 60.  Trains required to back down the grade between Summit and L’Anse or Morgan and Marquette will position the retainer valves as indicated above.

3. Four empty cars with cast iron shoes must be made up in every train operating between Summit and L’Anse when tons per operative brake exceeds 60.

4. Empty idler cars with cast iron shoes will be stored at Nestoria and Marquette and will be used when necessary to reduce the tons per operative brake to the prescribed limits.

6. When conditions require, the train crew must use the locomotive or snow plow to clear the main track of snow before ascending or descending the grade.