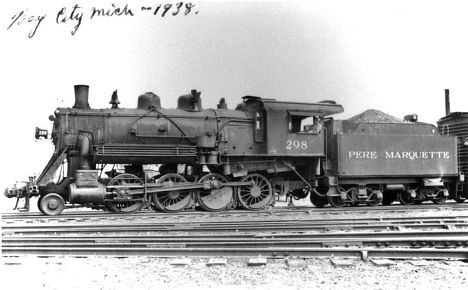 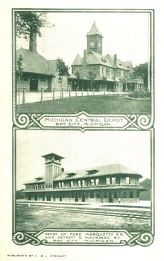 Bay City was settled in 1835 as a trading post, but it became a major logging center, and then home to the Industrial Works, a leading manufacturer of cranes including railroad wreck derricks. It was oriiginally called Hampton, and later Lower Saginaw. In 1857 it was renamed Bay City. The village was incorporated in 1859 and it became a city in 1865. West Bay City, on the west side of the river was consolidated with Wenona, Salzburgh and Banks in 1877 and in 1905, they all became part of the City of Bay City. [MPN]

Photo info/credit: Top, a photo of a Pere Marquette 2-8-0 locomotive at Bay City, which was taken in 1938. [Dan Meinhard collection]. Bottom, a post card view of two Bay City depots. The top is the MCRR east side station. The depot at the bottom is the Pere Marquette union depot which was shared by the PM and Detroit & Mackinac railway. The city had at least three othedepots, including the Detroit, Bay City & Western (which was near the MC east side station), the MC West Bay City station, as well as a Grand Trunk Western depot.

1868 improvements. A new freight house 100x30' is built with improvements to the grounds and dwelling. A new dwelling house for trackmen was also built at Eagle Island. A new dock for accommodation of freight by water, including lumber and staves, 859; long and 163' on the Saginaw River at Bay City. This is complete except dredging the slip alongside, which is under contract, to be done on the opening of navigation. [F&PM-1868]