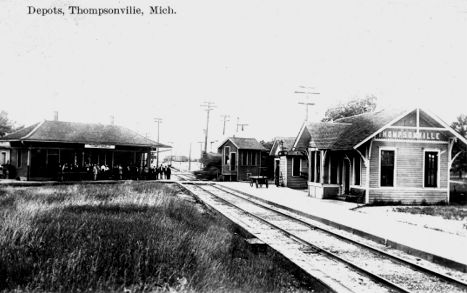 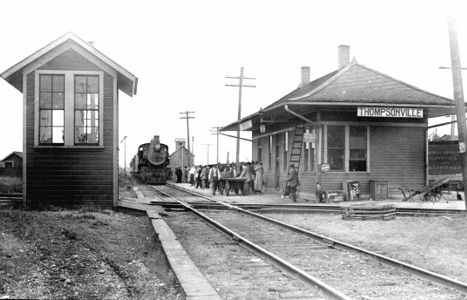 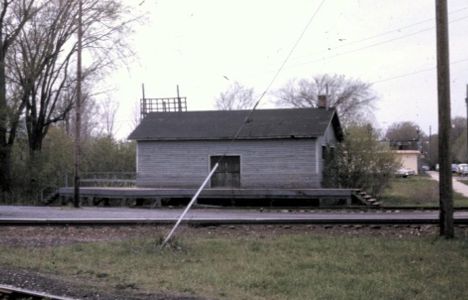 Thompsonville, in its present location in Benzie County, was founded about 1890. [MPN] It was the location of both the Pere Marquette railroad line to Traverse City and the Ann Arbor railroad line to Frankfort. Both roads had depots here, as well as a 1-story interlocking "tower" which controlled the crossing.

Photo info/credit: Top, an old photo of both depots and tower. 2nd photo, a better view of the interlocking "tower", which actually appears to be a ground interlocking which was enclosed with a small shelter. The boards extending from the shelter cover pipes from the interlocking machine to the signals (such as the semaphore in the background which is set to the "proceed" indication). [Both, Mark Worrall collection]. 3rd photo, The joint C&O/AA freight house in 1968. [Charles Geletzke Jr.] Bottom, TSBY 385, 392 and 389 pull the Annie Rambler, an excursion passenger train of the Bluewater Chapter, National Ry. Historical society at Thompsonville, on September 28, 1985. [Neil Plagens]

1918. The AARR had a station agent at Thompsonville during the day, as well as a tower operator during the day shift. The tower was not manned overnight. [TRT]