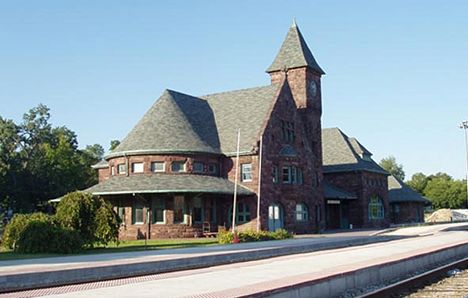 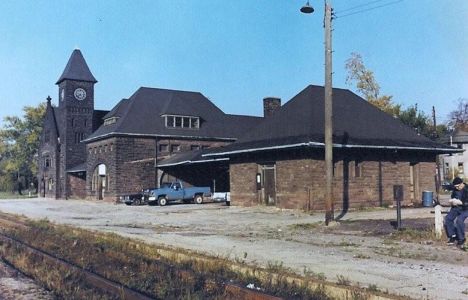 Niles was founded by a French Jesuit in 1690 who was given land by the French government. A military post was built in 1697 and the town became known as Fort St. Joseph. The fort fell to the British in 1761 and to the indians in 1763, then to the Spanish and indians in 1780 and 1781 at which point it was abandoned.

A permanent settlement was begun in 1828 by people from Ohio. It was firt called Pogwatigue ("running water") and was changed to Niles in 1829, named after the town newspaper editor. The town was incorporated as a village in 1835 and city in 1859. Niles is the only city in Michigan to hae been under four flags: French, English, Spanish and American. [MPN]

The railroad first came to Niles when the Michigan Central built here in 1848 on its route to Chicago. The line was extended west of town in 1849. The Michigan Air Line, later a MC property was built east towards hree Rivers in 1871. The Big Four built north through town from Elkhart to benton Harbor in 1882. At some point, the MC built a short branch line south to South Bend, including a siding at Notre Dame University.

In 1919, the Michigan Central dramatically expanded the terminal at Niles and it became a major MC classification yard on the west end of the MC main line. The MC also split freight operations here, sending eastbound freight train traffic on the Air Line to Jackson, receiving westbound freight from Jackson on the main line via Kalamazoo. This relieved congestion on the MC mainline, particularly through busy Kalamazoo.

The Air Line branch, east from Niles to near Three Rivers was abandoned in 1937. In the 1960's, the Niles Terminal was downgraded following construction of the New York Central Robert Yount Yard in Elkhart. In a period of only 41 years, this terminal went from boom to bust as a railroad center because of this change.

1920 - Niles has both a passenger ticket agent and a freight agent. Interline tickets are also in stock. The passenger agent is J. C. Charter. The freight agent is W. S. Barron. The telegraph call for this station is "VN". [MCOAS]

1920 - On the Michigan Central South Bend Branch, this is a passenger and freight agency with the same agents as above. The telegraph call sign is "VN". [MCOAS]

In 1980, the north section of the Big Four, now under Conrail ownership was pulled up from Niles north to Benton Harbor. The South Bend branch was also removed in the 1980's.

August 23, 1912. Traffic on the Michigan Central in the vicinity of Niles, Mich., was seriously disturbed on account of a storm on Sunday, August 18, which washed out tracks and yards, and necessitated the detouring of traffic over the Lake Shore. [RG]