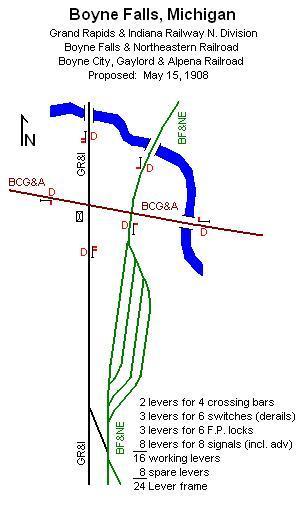 Boyne Falls Interlocking Tower was located in Boyne Falls at a crossing of the Boyne City, Gaylord & Alpena railroad and the GR&I and Boyne Falls & Northeastern.

Bruce Gathman, in 2002 commented that it is likely that the interlocking tower was built here because the foundation for the structure is still in existance. He noted that the east-west banch was used by the White Lumber Company. It came off the BCG&A about two miles to the west. He also noted that the BF&NE had a four-stall engine house and other tracks and structures here, inaddition to what is shown on the map.

Photo info/credits: Map, drawn from the interlocker files at the State of Michigan Archives, showing the 3 roads. The east-west BCG&A line was likely a logging branch. [Dale Berry]