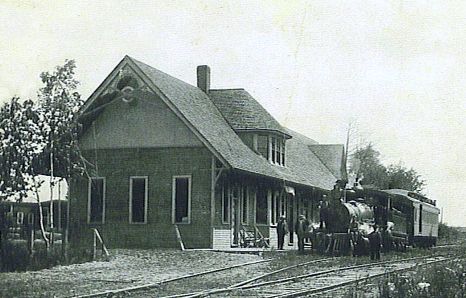 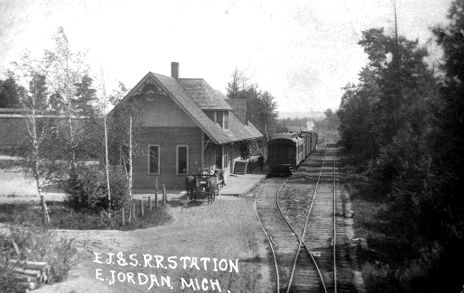 East Jordan in south Charlevoix County was established on the south arm of Lake Charlevoix about 1873. It absorbed the nearby village of South Arm and was incorporated as a village in 1887 and a city in 1911. [MPN]

East Jordan has been the home of the East Jordan Iron Works, which was founded in 1883. EJ owns and operates four foundries, one of which was located in town here. (This foundry was moved to Elmira in 2019). They make many of the sewer basins and manhole covers used by Michigan municipalities.

The town was served by the East Jordan & Southern for many years, as well as the Detroit & Charlevoix (later MC) branch line.

Photo info/credits: Top two photos, a postcard view of the EJ&S depot in its namesake town. A mixed passenger freight train is on the siding in front of the depot. An old car of the period has backed up, perhaps to load luggage. [Alan Loftis Collection]. 3rd photo, a 1909 photo of an early passenger train at East Jordan 3rd photo. Bottom, another view of the East Jordan depot with a mixed train ready to depart for the south, in 1911. [Mark Worrall Collection]