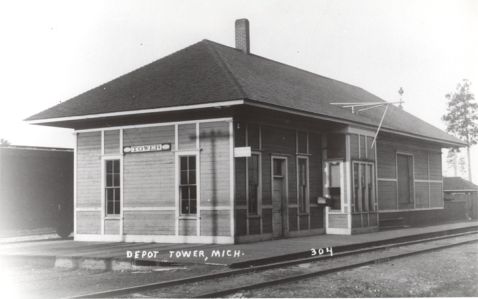 Tower was a station on the Detroit & Mackinac railway in southeast Cheboygan County. It was settled about 1889.

Several logging branches radiated south and west from Tower in 1900 and early maps suggested that the railroad at one time considered extending the D&M road west to the Petoskey area. But around 1904, the railroad decided to build northwest from here to Cheboygan, via the east shore of Mullet Lake.

The sign on this depot has been preserved by the nearby Onaway Historical Society museum. Because this was an early railroad town, one might think it is named after a water tower. But it was actually named for a daughter of Judge Samuel S. Tower. She served as an army nurse in the Spanish-American war and died of typhoid fever. [MPN]

In the Matter of the Application of the Detroit & Mackinac Railway Company for Authority to Make Its Stations Aloha, Tower, Saganing, Long Lake and Lupton Non-Agency Stations. D-1955. September 15, 1924.