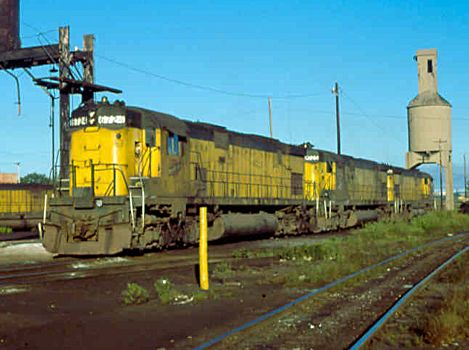 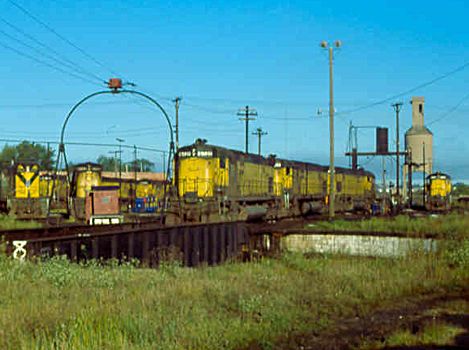 The Chicago & North Western facilities in Escanaba were centered in four areas. The depot was located at the west side of what is now the downtown area and also co-located by the E&LS depot. Locomotive facilities were originally located on the north edge of downtown, near the coal transloading area along the lake. A concrete coaling tower is still located in this area but abandoned. The third area was the ore docks and ore loading facility along the bay north of downtown. This facility also had a large "ore yard" west of here. The 4th area was the C&NW shops and engine service facility, which is still located by the fairgrounds and used by the E&LS and other industry.

Photo info/credits:  Top and bottom, the C&NW engine facility in downtown Escanaba. The top and bottom photos show the concrete coaling tower, which continues to exist in 2014. The bottom photo shows the turntable which was formally used to turn steam locomotives. These 6-axle Alco diesel electric locomotives powered ore trains between Negaunee and the ore docks at Escanaba during the 1960's and 1970's. [Charlie Whipp]

The C&NW had major facilities at Escanaba. The railroad had a large repair facility and a tie-treating plant. 750 men were employed her by the railroad in the late 1800's. The roundhouse was completed in 1869 with fifteen original stalls. By 1890 the roundhouse had nineteen additional stalls, probably built before 1881. In addition to the roundhouse, there was also a 30' by 300' brick machine shop, and a 60' by 300' blacksmith shop. The roundhouse was reduced in size in 1952 and again in 1961 leaving only six stalls. The roundhouse had an outside diameter of 200'. It was a wood frame sgtructure excelt for one interior wall intended as a fire wall. The turntable was 12' wide and 95' long. [UPM]