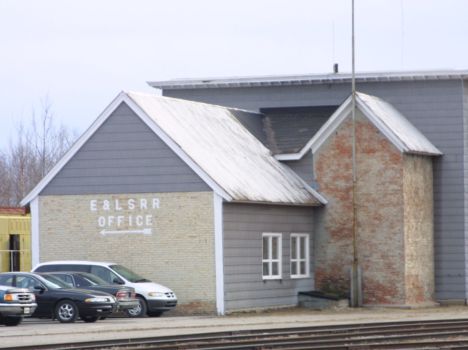 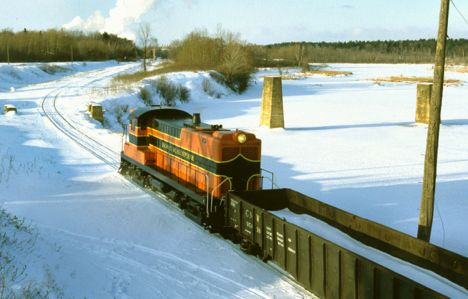 Wells was settled in 1847 on Little Bay de Noc at the mouth of the Escanaba River, about five miles north of Escanaba. There were several timber saw mills located here. [MPN]

The Escanaba & Lake Superior located its offices, locomotive and car facilities here. Even though they had a line to a depot in their namesake city of Escanaba, the railroad established its major presence here. For many years, the Milwaukee Road used the E&LS to bring ore from the Menominee Range to an ore dock here for lake shipment. This continued until the Milwaukee Road reached a pooling agreement with the C&NW in the 1930's.

Photo info/credit:  Top, the E&LS railroad office in wells was likely the railroad's passenger station at this location. [Dale Berry]. Bottom, E&LS #300 pulls a freight train near Wells in 1998. The piers for the Escanaba-Wells street car line can be seen to the right. [Neil Plagens]

C&NW Bridge Over the Escanaba River. The current bridge was built for the C&NW railroad in 1892. It was constructed by the Lassig Bridge and Iron Works of Chicago. It is the second bridge at this location. The remains of stone piers from an earlier structure can be seen nearby. The current bridge consists of ten riveted steel triple-intersection Pratt through trusses, each 60' long. They rest on finished ashlar abutments, four ashlar piers, and five steel piers. [UPM]

MSP&SSM Bridge Over the Escanaba River. This railroad bridge was constructed in 1901 by the American Bridge Company of Chicago and has an overall length of 680'. There are a total of nine spans, all resting on concrete piers and abutments. Five of these are steel Pratt deck truss spans, with verticals, each 100' long while the remaining four spans are steel deck girders each 45' long. [UPM]