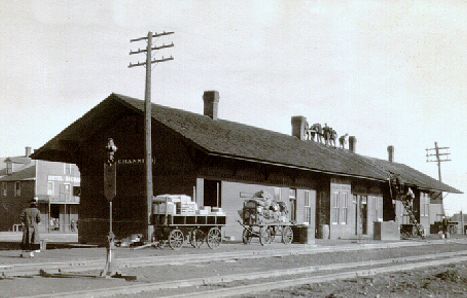 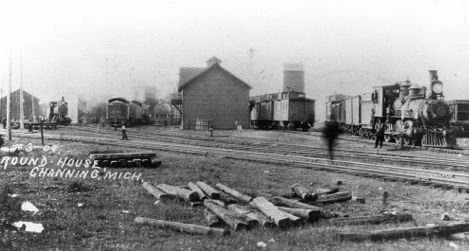 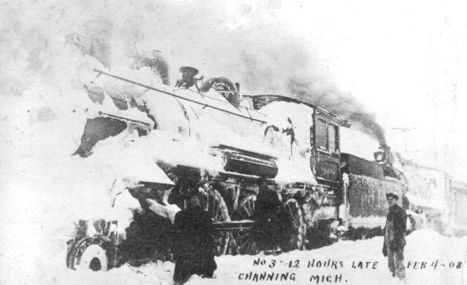 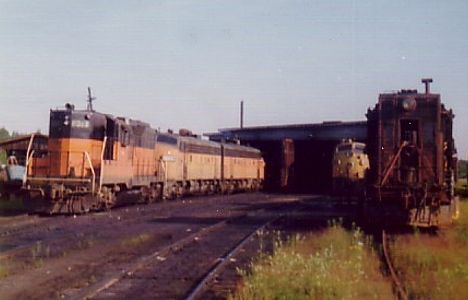 Channing is a village in northwest Dickenson County, which is a junction between two Escanaba & Lake Superior railroad lines. The town was settled in 1892 as Ford Siding, and changed to Channing when the post office was established in 1892.

The Milwaukee Road came through here on their line from Iron Mountain to Champion. They established a branch line from here to Ontonagon, known as the "O&B", in 1894. Later, this branch served another branch to Crystal Falls and Iron River. In 1900, the Escanaba & Lake Superior built a branch to here from Wells (near Escanaba). The E&LS line was used for a number of years through trackage rights by the Milwaukee Road to reach their iron ore dock in the Wells area until a pooling arrangement was reached with the CNW moving this traffic to other routes.

The branch to Crystal Falls/Iron River was removed in 1969.  The O&B route remains but has been truncated at Rockland. The E&LS line east continues to exist but does not serve customers. It holds storage cars for the E&LS at various locations.

The depot at Channing still exists and is used by the E&LS for dispatching its lines in Michigan and Wisconsin. They also have a yard here.

The Milwaukee Road had a water tower which was located on the east leg of the wye with the standpipe at the wye. The coal dock was next to it. [GB]

The Channing Depot and Roundhouse (Milwaukee Road) was built in 1888. [UPM]

January 21, 1911. Switchman badly injured. W. H. Orr a switchman in the employee of the St. Paul road at Channing was badly injured this morning while at work in the yards. He was helping to switch a cafe car of the Copper Range railroad the Miscowaubik, and was standing on the steps. He failed to notice a number of cars on the side track and as the cafe car passed them, he was struck and thrown under the wheels of the Miscowaukik. His right leg was cut off. A special train hurried him to a hospital at Iron Mountain. It is said his condition is serious and that he may not survive. Orr is a married man and lives at Channing. [CN-1911-0121]

1918. MILW had a station agent and operator here on the day shift, in addition to the dispatcher. [TRT]

August 15, 1922 - STATE POLICE SENT TO CHANNING. Lansing, Aug. 15--A small detachment of state police, from the police pose at Negaunee, was ordered to Channing by Governor Groesbeck, last night. One man was reported wounded in disorders in connection with the railroad strike in Channing, Sunday. [Jackson Citizen Patriot, August 15, 1922]

September 18, 1926. The CMStP&P lets a contract for a pumping station and other buildings at Channing. [RR]