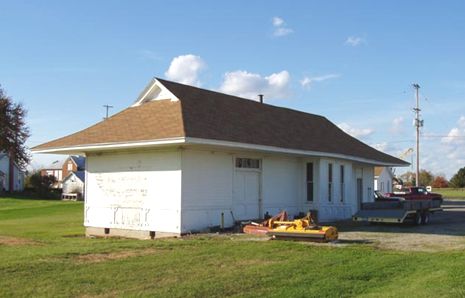 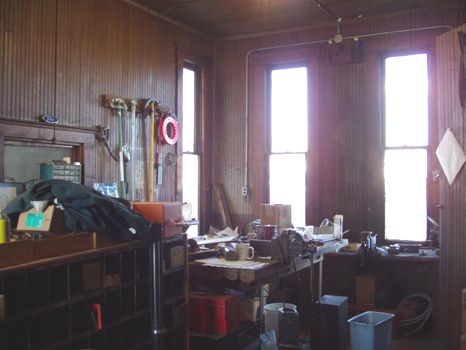 Waldron was settled around 1835 and was a station stop on the Cincinnati Northern railroad in southeast Hillsdale County. It was located at CN milepost 39.5 (from Jackson) and the station was assigned the telegraph call "RD". Waldron had a 34 car siding and the station was equipped to handle three double deck stock cars with watering and weighing facilities. An elevator, owned by the United Grain & Fuel Company, had a 4,500 bushel capacity. [HC]

The town was known early on by various names, including Cannon, Wright and South Wright. It became Waldron in 1877 and was incorporated as a village in 1905. [MPN]

Photo Info/Credit: Top, the Cincinnati Northern depot at Waldron with a passenger train arriving in front. 2nd photo, three photos taken in 2004 on this depot. 3rd and 4th photo, inside photos of the depot showing the ticket window and ticket agent's area. [All photos, Alan Loftis]

October 16, 1906. Post Office Safe Was Blown Open. Robbers Kept Citizens of Waldron Indoors by Show of Arms. The post office at Waldron was robbed this morning at 1 o'clock, being blown open with nitroglycerine. There was no one on the street at the time, and when a loud report was heard citizens rushed to their windows to see three men, armed with guns, on guard around the post office. Mr. Street, a merchant living opposite the post office, went to the door and was ordered back by one of the men on guard, who threatened to shoot him.

There were five in the party and as they were only a short distance from the Cincinnati Northern railroad, they soon boarded a handcar and went south six of eight miles to Alvordton, the first station across the state line in Ohio, where they scattered and were lost track of. From $400 to $500 worth of stamps were taken but there was not much money in the safe. [Detroit Free Press]