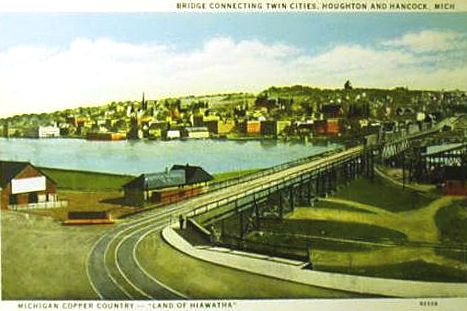 Hancock was settled about 1846 across Portage Lake from Houghton. The town was platted by the Quincy Mining Company. Hancock became a illage in 1875 and a city in 1903. [MPN]

Photo Info/Credit: Top, this is one of the earlier railroad bridges between Houghton and Hancock from the Hancock side, a postcard view.

1900. The Houghton County Traction Company Car Barn was built in 1900 at Ash Street and Park Street. This large wood-framed car barn consisted of three distinct but connected segments: the easternmost segment, fronting on Ethel Avenue is single-story with gabled room 40' by 75'. A middle segment, two stories high, rested on a stone foundation 75' by 120' long. The westernmost section was also two-story, 50' by 100' long. The building continues to exist in 2016. [UPM]

1910. William Anderson, 23, was fatally injured this morning while engagged in coaling an engine in the Mineral Range yards at the foot of Ravine street in Hancock. He was caught between the engine tender and the corner of the coal sheds and as the locomotive backed up the life of Anderson was crushed out. He was employed as a "hostler" in the railroad yards and engine No. 604 had just been turned over to him to be coaled up. [CN-1910-0505]

1920. The DSS&A Hancock station and freighthouse were built on Depot Street in about 1920. [UPM]