This was the original Fort Wayne & Jackson railroad. The route was reorganized several times, becomming the Fort Wayne Branch of the Lake Shore and then New York Central from Jackson south to Fort Wayne, IN. Station hours and siding capacity from 1936 and based on 44' cars.

Jackson: Early on, this branch line may have crossed the MC main line near Jackson Junction to get to a station which was on the north side of the main line. Soon, this line used Jackson's union station. The yard in Jackson was known as the "Fort Wayne Yard" and was approximately near where the Amtrak section house is today just east of the Union Station.

Jackson: The Fort Wayne Branch ran on the north side of the Michigan Air Line from Jackson to Haires. Then, for a time, both lines operated as double track.

OD Tower: 10 mph through this interlocking.

Haires: The Fort Wayne Branch crossed over the Air Line as it turned south here. 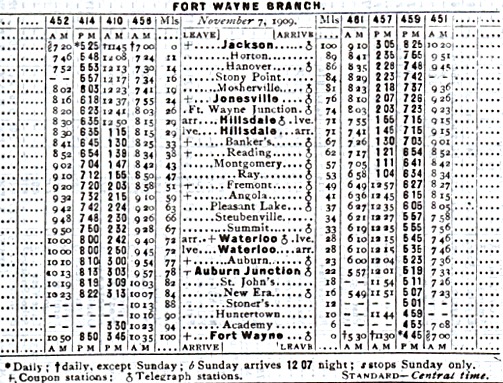